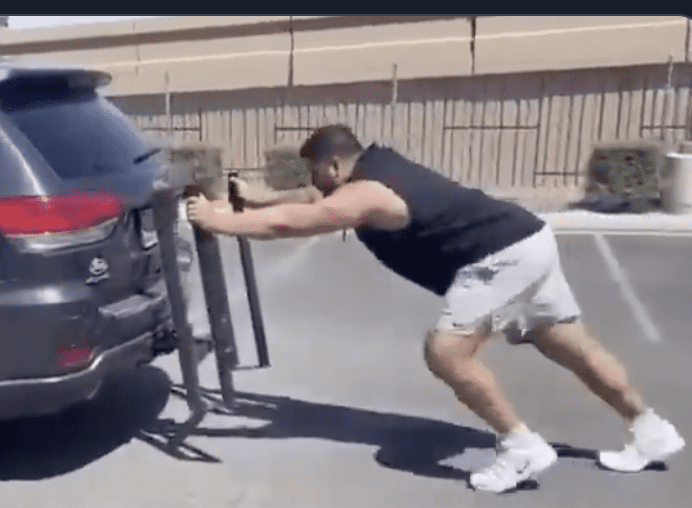 The coronavirus pandemic has forced NFL players to work out in interesting ways, and the New York Giants are no exception to that reality. Left guard for Big Blue, Will Hernandez, took to the streets to increase his strength and power. Hernandez posted an Instagram story of him pushing a car and blasting Katy Perry on the radio.

Ok, so Will Hernandez (@willhernandez76) is out here pushing cars to Katy Perry on radio ðŸ˜‚ pic.twitter.com/O9BwLSytHl

Hernandez was a second-round draft pick in 2018 in Dave Gettlemanâ€™s first year with the Giants. While he did regress a bit in 2019, primarily due to inadequate performance is on his left and right side, he still only allowed two sacks and four penalties, which both ranked 29th or better, according to PFF.

The drafting of Andrew Thomas out of Georgia should help Hernandez in pass protection and run blocking in 2020. With the expectation that a position battle will take place at center, Hernandez could have two new running mates beside him. Hopefully, that is a positive thing after Nate Solder had an atrocious 2019 campaign, allowing 11 sacks, ranking second-most in the league.

Some analysts believe Nick Gates will win the starting center position going forward, after portraying quality at both right tackle and right guard. While heâ€™s never played on the interior, his frame could fit the position well, and being an undrafted free agent helps the Giants in their cap allocations towards the offensive line.

The new line, which consists of Andrew Thomas at left tackle, Will Hernandez at left guard, Nick Gates at center, Kevin Zeitler at right guard, and either Solder, Cam Fleming, or Matt Peart at right tackle, should see an improvement.

This would certainly represent a different unit for Daniel Jones in his second season in the NFL. However, the Giants hired Jason Garrett and former Dallas offensive line coach, Marc Colombo, who has the pedigree to install a dominant unit.