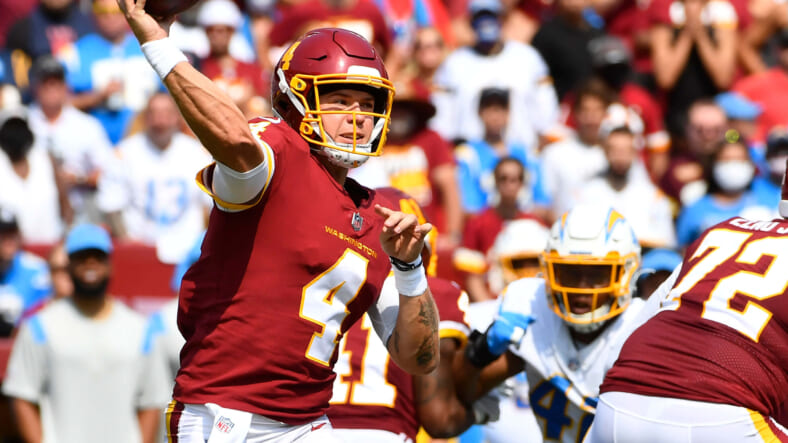 The New York Giants are coming off of an embarrassing Week One loss to the Denver Broncos. The team will travel to play the Washington Football Team on Thursday. A short week and a small amount of time for the team to make a crucial turnaround.

The Washington Football Team will be without its starting quarterback, Ryan Fitzpatrick, for Thursday’s matchup. Fitzpatrick went down with a hip injury during the team’s Week One loss to the Los Angeles Chargers. Ryan Fitzpatrick suffered a hip subluxation and isÂ being placed on injured reserve. He is expected to miss 6-8 weeks. Taylor Heinicke will start in his place on Thursday night.

Taylor Heinicke took over for Ryan Fitzpatrick after he went down with a hip injury in the second quarter of the team’s first regular-season game.

Filling in for Fitz, Taylor Heinicke went 11-of-15 for 122 yards and one touchdown as the Football Team fought hard but came up short against the Chargers. Heinicke has been in the NFL since 2017 but has only one career start to his name. He has played for three teams but has shown some potential in various moments as a backup.

Taylor Heinicke got the start for Washington last year in the 2020 NFL playoffs against the Tampa Bay Buccaneers. Many were impressed with Heinicke as he fought hard and put together a surprisingly decent performance as a fill-in. Heinicke threw 44 passes with 26 completions, one passing touchdown, one interception, and one heroic touchdown run:

In honor of being 8 days away from the 2021 NFL season, here's Taylor Heinicke's unforgettable 8-yard TD run ? @WashingtonNFL

When it comes to backup quarterbacks in the NFL, Taylor Heinicke is one of the better options in the league. The Giants need not underestimate their opponent this week. Washington will be without Ryan Fitzpatrick, but Taylor Heinicke played well in relief of the starter and will pose a threat to a Giants’ defense that allowed 27 points on Sunday.

The New York Giants need to win this crucial, divisional matchup on Thursday to turn their season around. Facing a backup quarterback could make that goal much easier to accomplish.