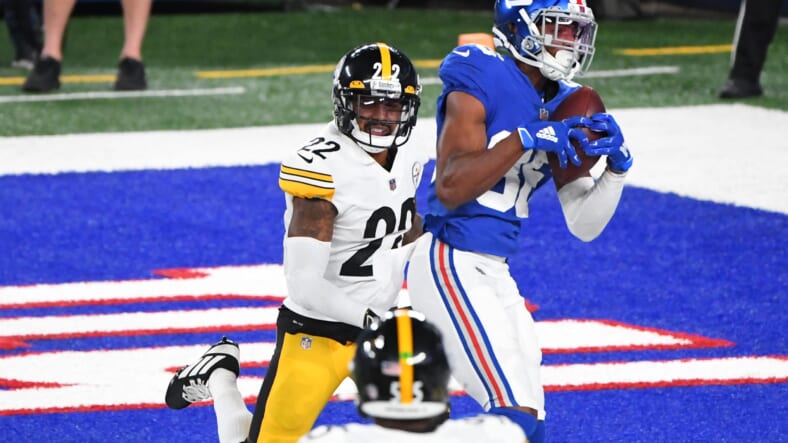 The New York Giants‘ winning streak came to an end on Sunday after a putrid offensive performance against the Arizona Cardinals. New York let up eight sacks and gained only 159 total yards of offense. Daniel Jones played through his hamstring injury and passed for only 127 yards before being pulled for backup Colt McCoy.

All game long, Daniel Jones was struggling to find open receivers to throw to. The Giants’ wide receivers could not separate from coverage on Sunday. They were completely outmatched and they have been for most of this season. The season is far from over, with the Giants only one game out of first place in the NFC East. However, it will be hard for the Giants to slip into the postseason if their receiving corps continues to play at this level.

The New York Giants starting wide receivers are Sterling Shepard, Darius Slayton, and Golden Tate. Shepard has been with the Giants the longest but has been held back by injuries over the last few seasons. But now, seemingly fully healthy, Shepard has not opened up the offense the way he was expected to.

Golden Tate is in his second season with the New York Giants. He was signed to a lucrative contract last offseason. Since then, Tate has been in the spotlight for a few of the wrong reasons, such as a PED suspension and a public criticism of the Giants’ offense.

Darius Slayton is the Giants’ second-year wide receiver that was expected to have a breakout 2020 season. That has not happened, though, as Slayton has been entirely unreliable this season. In Week 10, Slayton had 5 receptions for 93 yards. He followed that up with a 0 reception performance in Week 11.

Inconsistency and injuries have held the Giants’ receiving corps back in 2020. But what has held them back the most is a simple lack of talent. Yes, Tate, Shepard, and Slayton are talented receiving options. But no, none of those guys are true number one wide receivers that open up an offense and allow the offense to run through them.