New York Giants: What to expect from the offensive line moving forward 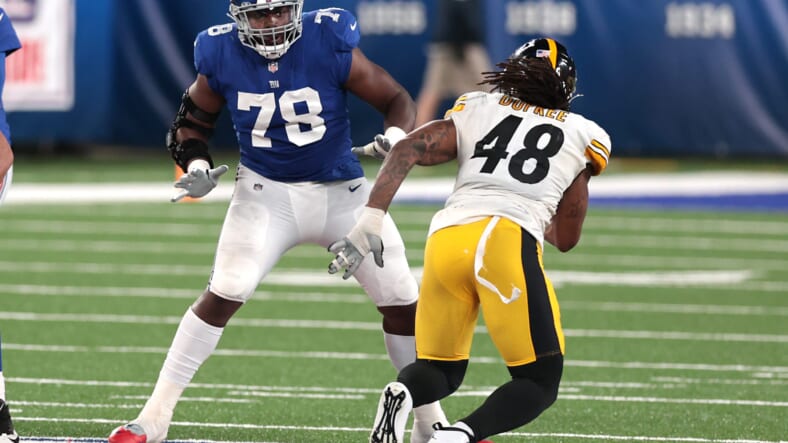 Continuity, chemistry, cohesion, these are all words that describe what the New York Giantsâ€™ offensive line should be aiming for. So far, none of these descriptive words even closely represent the Giantsâ€™ front five.

In fact, theyâ€™ve been so bad, they rank dead last in pass protection in the NFL, via PFF. Daniel Jones is one of the most pressured quarterbacks in the league for the second consecutive season, and the line is once again torturing their ability to succeed on offense.

The Giants made sweeping changes to their coaching staff this past off-season, including hiring former Dallas Cowboys offensive line coach Marc Colombo. As a former player, Colombo has the inside scoop on his players and their tendencies. He is a fantastic coach, even if the Giants aren’t displaying what theyâ€™ve practiced the past few weeks.

After three weeks of poor play, the offensive line is angry, but that doesnâ€™t translate to success.

â€œI love that theyâ€™re pissed off. Thatâ€™s the type of group that we want.â€

The running game for the Giants has been virtually nonexistent, as Daniel Jones lead the team in rushing yards against the 49ers last Sunday. His 49 yards was four times as much as the man behind him, Devonta Freeman, who only enjoyed 29% of offensive snaps.

â€œWeâ€™ve gotta do better in the run, period. Thatâ€™s where weâ€™re falling short right now. Itâ€™s going to alleviate a lot of stuff in the passing game. Thatâ€™s something we have to do,â€ Colombo said.

While pass protection has been bad, there have been plenty of opportunities for Jones to deliver the ball accurately. Establishing the run also helps in the passing game, as it forces teams to drop back into coverage and respect the play-action.

The Giants are simply a mess across the board, and every weakness is connected to one another. The offensive lineâ€™s struggles have been everlasting, and general manager Dave Gettleman, who is known for his ability to find good value in the trenches, has been unable to piece together this unit.

â€œWeâ€™re a million reps behind so weâ€™ve gotta keep getting it, keep getting the technique down, keep grinding,â€ Colombo said. â€œWeâ€™re seeing a lot of stuff for the first time, but weâ€™re at a point now weâ€™re going into Game 4 this stuff should be ironed out. Itâ€™s our job this week to iron it out and move forward and get some more consistent play out of this group and it starts with me.â€

Continuity is a significant factor for success in the trenches, and considering this is a rebuilt line with three players playing new positions; it was never going to be smooth sailing right off the bat. A tumultuous start was always written in the stars, despite the Giants expecting to develop quickly with the talent they have available. That has not been the case, as teams with strong defenses have dialed up creative blitzing techniques.

When it comes to blitzing, opposing defenses have utilized stunts and delayed blitzes to catch the Giants off guard. It has worked up to this point, but Colombo is confident his unit will improve over time.