New York Giants: What the tight end position would look like without Evan Engram in Week One 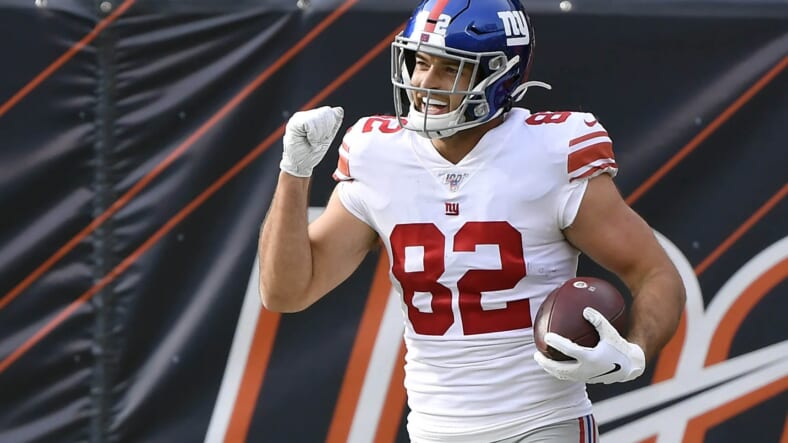 The New York Giants are preparing for the start of the regular season this week. Their season kicks off on Sunday afternoon with a home game against the Denver Broncos. Today’s injury reports have given fans encouragement on running back Saquon Barkley, however, they have also given a bleak outlook on tight end Evan Engram.

Evan Engram suffered a calf injury in the Giants’ final preseason game this year. The Pro Bowl tight end has been healing up in hopes of playing in Week One. According to Ian Rapoport, Engram has yet to be ruled out for Sunday, however, he is considered a “long-shot” to play.

What the Giants’ offense would look like without Evan Engram

The other first-string tight end is Kyle Rudolph. The Giants signed Rudolph this offseason to be a reliable underneath receiver and a top-tier red zone threat. If Evan Engram is unable to play, Rudolph will likely stay in his original secondary role that complements Engram’s primary role. A practice squad tight end could also be promoted to the active roster.

Kaden Smith is listed as the second-string tight end for both starting positions. The Giants are surprisingly holding only three tight ends on their roster going into this season. Kaden Smith is the team’s backup tight end but he is no scrub. Smith has been with the team since 2019 and had an impressive performance in the preseason finale, hauling in a contested 23-yard touchdown reception.

Kaden Smith is a young tight end that has the ability to contribute as a receiver and as a run-blocker. The Giants’ offensive attack might be altered slightly on Sunday if Evan Engram is unable to go. However, Kaden Smith should be able to make up for most of what is lost.