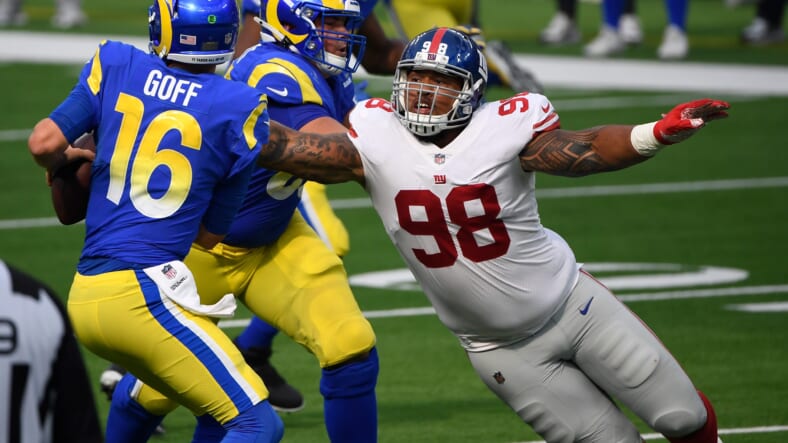 The New York Giants lost to the Los Angeles Rams in a defensive slugfest on Sunday.

The final score of the game was 17-9, and practically the whole game was a defensive battle. Even with the loss, there were still many positives as the Giants bounced back from a week three blowout defeat.

Hereâ€™s how this defeat affected the stock of various aspects of New Yorkâ€™s team.

Stock up for the New York Giants:Â

Martinez had a monster game once again on Sunday. He recorded 13 tackles (8 solo) and one tackle for loss as he was a menace all over the field. His performance boosted his Pro Football Focus (PFF) grade to 79.4 which is 5th out of all linebackers in the league. His run defensive grade of 90.8 is also first in the NFL among linebackers. These first four games have firmly shown that the Giants were wise in singing Blake Martinez this offseason.

Kyler Fackrell, another Giants linebacker signed from Green Bay, also showed out in Los Angeles. The EDGE defender recorded four solo tackles, three tackles for loss, and one sack. This was a strong outing for Fackrell and definitely boosted his stock on this team.

Big Blueâ€™s run game was able to have the best game of the season against a solid Rams defense. The Giants were able to rush for a season-high 136 yards on an average of 5.4 yards per tote. Daniel Jones added 45 of these yards as he showed off his athleticism in the run game. This was a good sign as the lack of run game has been severely detrimental to the Giants offensive attack. If the Giants can run effectively going forward then they will have a chance to maybe put up more than 20 points against a very bad Cowboys defense.

Austin Johnson had the best game of his short career in week four. In this game, Johnson recorded two solo tackles, one sack, and one forced fumble. This was the first forced fumble of the Penn State graduateâ€™s career and the third sack of his career. He likely will not play a big factor in the future of the Giants but this one performance definitely increased his stock.

As you can see with three defensive players on this stock up list, the Giants defense vastly overperformed expectations on Sunday. They were able to have their best game of the season holding a potent Rams offense to next to nothing. Much of this is due to the elaborate and successful scheme by Patrick Graham which kept Sean McVay (arguably the best offensive mind in football) offense in check. The Rams only threw for 200 yards and rushed for 58 more—both season lows.Â

This defensive masterpiece by Graham with one of the league’s worst defenses, talent-wise at least, was truly impressive. If the Giants can keep him long term and give him some playmakers Big Blue could have a very scary defense.

Jones did not do much right in week four as he only threw for 190 yards and recorded a season-low QBR of 42.6. Daniel Jones also threw a game-ending interception that crushed the heart of Giantsâ€™ fans. However, this interception was stereotypical of Jones as he has yet to be able to take care of the ball throughout his whole career.

Love has not been great this whole season but on Sunday was definitely not his day. He was not really active in many plays. Love also let up the game losing touchdown in man-to-man coverage with Cooper Kupp. Julian Love got burnt overtop for 55 yards making the Giants need a touchdown to tie instead of a field goal to win.
Jason Garrett, Offensive Coordinator

Jason Garrett proved a lot of his doubters right against the Rams as he once again was unable to get the Giants to do anything offensively. The offense looked putrid as they were not able to convert any of their four red-zone trips into touchdowns.Â

The lack of touchdowns for Garrettâ€™s team is a very serious concern as they have yet to score one in two straight games. Over these two games, they have also only averaged nine points which are obviously not even close enough to get by in the NFL.

Golden Tate was very quiet on Sunday as he only recorded 20 yards on four catches. Golden Tate also dropped his only other two targets, one which was a high throw from Daniel Jones would have made a crucial first down. Tate has yet to produce for the Giants and his lack of numbers brings concerns to his long-term spot in East Rutherford.