New York Giants: Week 13 matchup with Seahawks would be favorable for Daniel Jones if healthy 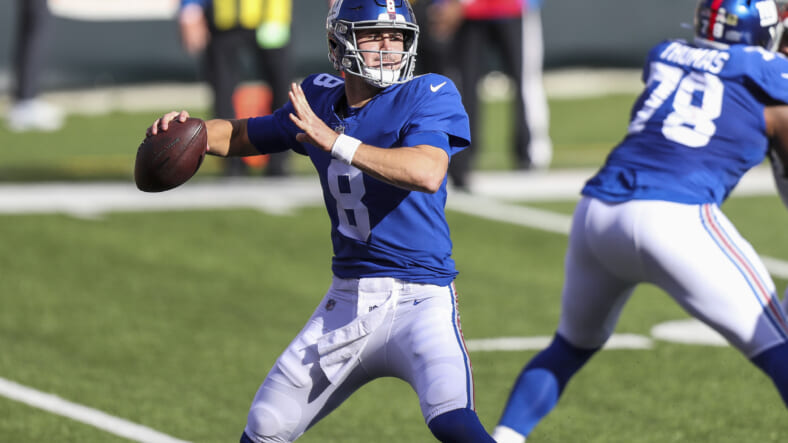 The New York Giants are uncertain of their starting quarterback’s status heading into Week 13. During the team’s crucial Week 12 victory over the Cincinnati Bengals, the Giants lost quarterback Daniel Jones with a hamstring injury. Jones has not practiced this week, but is likely to practice in some capacity on Friday with the hopes of playing in Sunday’s matchup with the Seahawks.

If Daniel Jones is not ready to play by Sunday, that would be a huge loss for the New York Giants. New York is set to play the formidable, 8-3 Seattle Seahawks on Sunday. This would be a tough game for the Giants to win anyway, but Daniel Jones could have given New York a real shot.

The Seattle Seahawks’ defense is one of the worst in the NFL. They have allowed opposing quarterbacks to tear their secondary to shreds, week after week. It is hard to imagine Colt McCoy continuing that trend, though. But Daniel Jones has really improved his play in recent weeks and will be looking at a favorable matchup on Sunday if he is able to play.

The Seattle Seahawks’ secondary is allowing, by far, the most passing yards per game in 2020. Opposing quarterbacks are averaging 328.8 yards per game against Seattle this season. This is happening despite the team’s key acquisition of star safety Jamal Adams.

Jamal Adams has not had the huge impact on this defense that many expected him to. He has allowed a 76.9% completion percentage in coverage this year and surrendered 330 total yards in 7 games this season. He is also missing tackles at a higher rate than he ever has, posting a 13.0% missed tackle percentage. Adams has earned an overall Pro Football Focus grade of 63.9, indicating a clear regression in performance from last season. In 7 games this season, Adams has surrendered 20 completions. In 14 games last season, he surrendered 21 receptions.

The Seahawks’ secondary has struggled all season long. Seattle is allowing opposing offenses to scoreÂ 27.6 points per game. This could have been a big week for Daniel Jones, who has come into his own in recent weeks. Daniel Jones has not turned the ball over in the Giants’ last three games. Playing his best football, it would Â be an exciting matchup for Jones as Seattle owns the league’s worst secondary in the NFL.

If Daniel Jones is healthy enough to play on Sunday, the Giants absolutely should let him play. Of course, there are risks that come along with that. Letting Jones play this week risks him reinjuring his hamstring and being out an even longer period of time. But if Jones is able to play against this terrible Seahawks secondary, he could lead the Giants to a potential upset. New York is racing a tight race to the playoffs right now. They need to get as many wins as they can and do everything they can to obtain these wins. One can only hope that Daniel Jones is healthy enough to play against a week Seattle defense on Sunday.