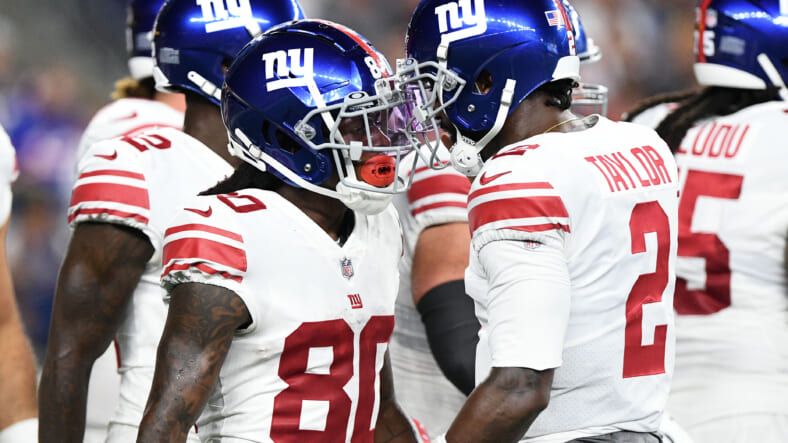 The New York Giants wrapped up their preseason opener with the New England Patriots tonight, taking the 23-21 victory. The Giants traveled down to Foxborough to kick off their preseason tonight. In the first game for this brand new regime, Brian Daboll and New York had their ups and downs but seem to have something solid in the making.

Tyrod Taylor saw extended action serving as the New York Giants’ quarterback tonight. His impressive performance should have Giants fans feeling much more comfortable with their backup quarterback position compared to last season. Taylor completed 13 of his 21 passing attempts for 129 yards and one touchdown pass completed to Richie James Jr.

Richie James has been a training camp standout for the Giants this summer. His impressive summer continued in today’s preseason game as he totaled three receptions for 44 yards and one touchdown off of a killer route.

The New York Giants’ first-team offense was nothing to write home about. Daniel Jones looked decent but still needs time to settle in and get comfortable with Brian Daboll and Mike Kafka’s new offensive scheme. Jones finished the game with six completions and 69 yards on ten passing attempts. The offensive line, at times, looked much improved from last season. But then again, they had their fair share of struggles. Wide receiver Collin Johnson put together a solid performance with seven receptions and 82 receiving yards.

One major injury to note for the Giants is that of starting left guard Shane Lemieux. The Giants’ lineman was seen in a walking boot post-game after suffering a toe injury during the first quarter. Backup center Jamil Douglass also suffered an injury that knocked him out of the game. Depth on the offensive line has been a concern, so the Giants will need to monitor this situation carefully.

On the defensive side of the ball, rookie linebacker Darrian Beavers stood out with significance. The Cincinnati product flew all over the field, making plays and could heat up a competition at the second starting linebacker position with Tae Crowder.

Second-year cornerback Aaron Robinson saw extended playing time but did not impress in the first preseason game. Additionally, rookie cornerback Cordale Flott suffered an injury. Depth at the cornerback position might become a concern for the New York Giants if things do not turn around quickly.

Overall, it was a solid introduction to the 2022 New York Giants in their first preseason game. Brian Daboll and company will want to build on this performance that brought their squad a victory.