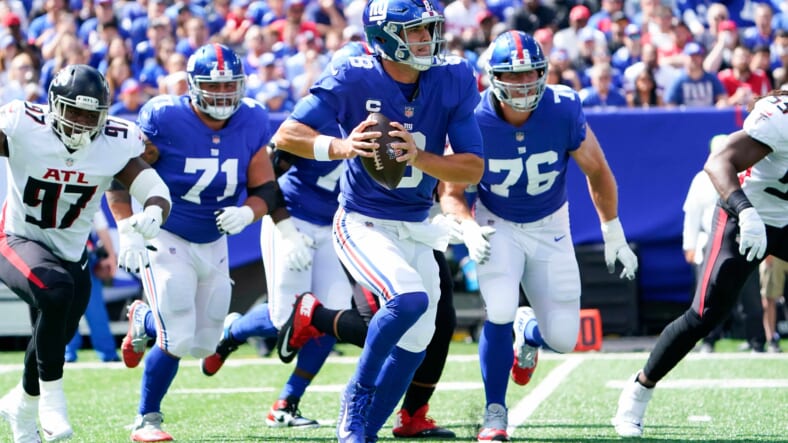 The New York Giants are hopeful that Sterling Shepard and Kadarius Toney will be available against the Kansas City Chiefs on Monday evening. However, there is a possibility that Toney is ruled out, as he will test his injured ankle during pregame warm-ups.

Having Toney available will give the Giants a much more advantageous situation on offense, given his yards after catch abilities. Among receivers this year, Toney ranks 4th with 8 yards after the reception on average. In terms of separation, heâ€™s creating 3.8 yards, a number that the Giants haven’t experienced in years.

The ultimate hope is that Toney can give Jason Garrett and his unit a bit more firepower to work with, opening up the deeper portions of the field. Kansas Cityâ€˜s defense will have to hyper-focus on the shorter route concepts where he can make defenders miss.

The Florida product has forced nine missed tackles, five of which came against the New Orleans Saints in Week 4. His availability will determine the strategy for Garrett but expect a heavy dose of Shepard nonetheless.

The Giants will have to score at least 25 points to have a chance against the Chiefs, but the Defense must also step up to the plate, despite losing Jabrill Peppers for the remainder of the season with a significant knee injury.

Given Kansas Cityâ€˜s high-octane offense led by quarterback Patrick Mahomes, who has tossed 18 touchdowns this year, putting pressure on him and limiting big plays is essential to victory. One key factor that Tennessee focused on last week in their victory was time of possession, crushing Kansas City in the category and winning the turnover battle by two.

While I believe Big Blue will give Kansas City a run for their money, they ultimately will run out of gas in the fourth quarter, giving the opposition an advantage. One possession will separate the two teams in the end, but Toney will have a field day against a patchwork Chiefs secondary.