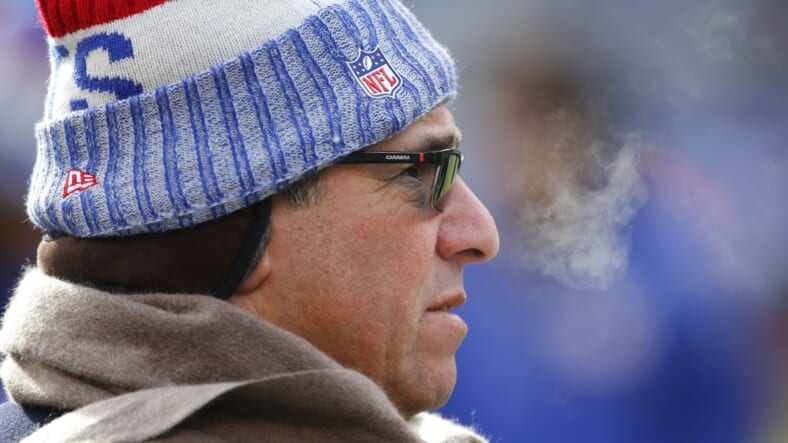 Early mock drafts often aren’t that accurate to the actual results, but that doesn’t stop them from being one of the favorite pastimes of the offseason – and the New York Giants so far have been mocked to a number of different players. There’s no consensus pick this year like there was when the Giants selected Saquon Barkley, and this draft more closely resembles last year’s one where the Giants took Daniel Jones to the surprise of many.

Experts so far have been trying to predict which player the Giants could surprise everyone with this time, and NFL.com has released their latest three round mock draft.Â

Like in many mock drafts, the Giants are seen as upgrading an area which has been much maligned during recent seasons despite a number of efforts to improve it by adding players like Nate Solder – the offensive line.

Solder may end up fearing for his job if this prediction is correct, because the mock draft has the Giants taking Louisville offensive tackle Mekhi Becton, one of the top prospects at the position along with Alabama’s Jedrick Wills, another player who has been linked to the Giants.

Perhaps more notably, however, the mock draft has the Giants picking at number six overall rather than number four – the scenario includes a trade with the Chargers, who move up to take Justin Herbert at the spot where the Giants would formerly pick.

PROJECTED TRADE WITH CHARGERS.Â GM Dave Gettleman moves down two spots to re-gain the third-round pick heÂ sent to the Jets for Leonard Williams, plus a 2021 second-round selection. An additional asset could be included in this deal, as well, like in the Bears-Â 49ersÂ trade from three years ago, when Chicago gave up two third-rounders and a fourth to move up one spot and selectÂ Mitchell Trubisky. TheÂ Giants’ choice between Becton, Jedrick Wills and Andrew Thomas will be one of the more interesting storylines in the early part of the draft.

The Giants picking a tackle with their first pick isn’t a ground breaking prediction, however. It’s been predicted by many that the team will go in this direction and it fits their needs based on last season. The later rounds are where things get murkier and where the best selection gets less clear, and the mock has the team make an odd choice here.

Receiver is a spot where the Giants suffered last season due to an early suspension for Golden Tate as well as injuries that included many weeks of concussion trouble from Sterling Shepard, but if these predictions hold true, the Giants will select LSU receiver Justin Jefferson with the 36th pick.

Of course, Jefferson has a stat line from college which is worthy of getting him drafted – maybe even higher than the second round. More than a thousand receiving yards along with eighteen touchdowns aren’t stats to laugh at for a receiver coming out of college as a junior, but one question remains… Do the Giants really need a receiver enough to take one in the second round? With Shepard, Tate, and Darius Slayton among others, there’s options at the position already even if last season has shown that Shepard may not be the most reliable leading receiver.

Other areas such as the secondary are in more dire need of support, but the mock has the Giants selecting a player to help with that area in round number three.

That player is experienced Ohio State cornerback Damon Arnette, who is coming out of the Buckeyes as a fifth year senior and started 11, 12, 13, and 11 games over the most recent four years. From the looks of it, his play style may just help the Giants avoid giving up yards to passes underneath, something that would be a major step in the right direction.

Here’s some of what the Draft Network has to say about the prospect:

Highly physical corner who loves to crowd the kitchen and cancel throwing windows before they develop. Versatile in playing from various leverages and is adept at getting his eyes into the backfield in timing with route breaks to find the ball first and play through the catch point. Grabbiness can draw flags but it’s worthy for his play style.

This draft haul would likely bring in a little bit of controversy, possibly around the Giants taking a receiver in the second round and waiting until round three to address the worse off secondary, but all of the players here could arguably improve the Giants – and combined with free agency additions could help the team avoid ending up in the same draft position next year.