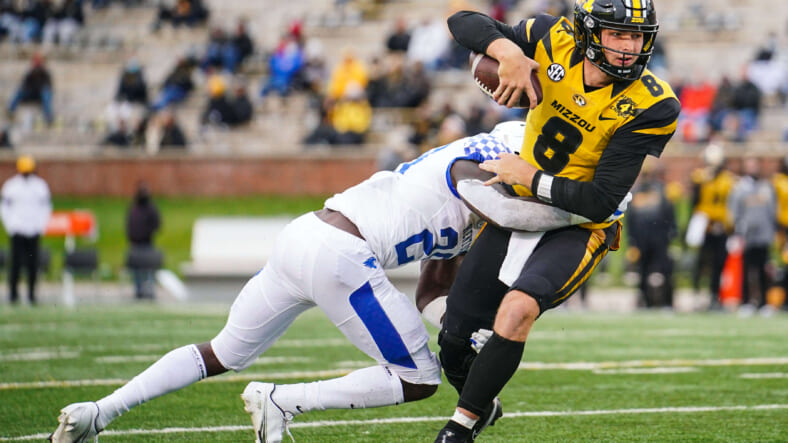 The New York Giants overturned their roster this offseason. A strong 2022 draft class has reignited the excitement within the fanbase. But beyond the draft class, the Giants managed to acquire talent elsewhere. One of the undrafted rookie free agents that the Giants brought in this summer has turned some heads during training camp. Yusuf Corker out of Kentucky has stood out at camp and looks to be a surprising competitor in the Giants’ secondary this season.

What Yusuf Corker is bringing to the Giants

University of Kentucky draft prospect Yusuf Corker was a projected fifth-round selection before surprisingly going undrafted. The New York Giants then signed Corker as an undrafted free agent. Since then, Corker has gotten active at Giants camp and has even earned a green dot on his helmet. Yusuf Corker is one of the Giants’ play-callers for their upcoming preseason opener against the New England Patriots.

Corker has been wearing the green dot for the Giants’ second team during practice and will call plays in the preseason opener. This will be a huge opportunity for the young defensive back as he competes for a spot on the roster. So far, though, Corker has been impressive and appears to be securing a role in Wink Martindale’s new defense.

Yusuf Corker is a physical tackler that likes to get involved in the running game. He can lay the boom and plays with some violence as a box safety. This ability has shown up in Giants camp as Corker recently ran to the ball carrier and forced a fumble in practice.

As a three-year starter for Kentucky in the SEC, Yusuf Corker was a consistent playmaker. He snagged three interceptions in that time combined with 6.5 tackles for loss and 18 passes defended. His tackles total was greater than 70 all three years and he even reached an impressive career-high 82 total tackles as a senior in 2021.

The New York Giants were thin in the secondary entering this offseason. After the departures of Jabrill Peppers, Logan Ryan, and James Bradberry, New York needed reinforcements. It seems like Joe Schoen and the scouting department might have found a gem in the undrafted free agency market with Yusuf Corker. At the least, the rookie should see playing time on special teams with room to grow into a defensive contributor.