New York Giants: Two practice squad players that could be called up in 2019 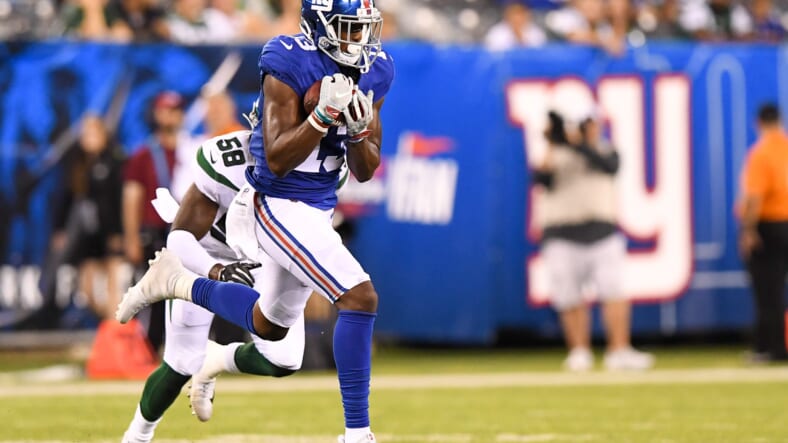 The New York Giants have been active the last few days trimming the roster down to the required 53-men and bringing in waiver players to fill positions of need.

The Giants made several surprising moves as well, one of which included cutting second-year quarterback Kyle Lauletta over Alex Tanney. One of the more interesting decisions by GM Dave Gettleman and HC Pat Shurmur, Tanney got the nod due to his experience and knowledge of the game. He’s expected to help Daniel Jones in his development.

However, the practice squad was also filled with decent players, and some could have an impact on the 2019 season.

Here are two New York Giants practice squad players that could be pulled up:

Hauling in eight catches for 115 yards over the preseason, White Jr. showed his ability to play at the professional level. The Monmouth product corralled several impressive passes for significant gains and displayed separation from cornerbacks. While he didn’t face off against first-stringers, White could make a small impact during the 2019 season.

The Giants have faced significant injuries and issues with the wide receiver corps this season, making the elevation of White a matter of ‘when.’ Golden Tate’s suspension of four games and Sterling Shepard’s thumb injury will eventually alleviate, but he could fill in as a back-end pass catcher if need be.

Keep an eye on Darius Slayton’s health, because that slot would be the best opportunity for White to slide onto the active roster.

Conrad is one of the more fascinating players of the preseason, he didn’t leave too much of a mark in the passing game, but he has excellent potential. After clearing waivers, Conrad signed on with the Giants’ practice squad. He has solid blocking abilities and can make a difference in the passing game. He’s a bit slow and unathletic, but his grit and heart make up for it in some facets.

With Scott Simonson out with a high ankle sprain and Evan Engram an injury waiting to happen (knock on wood), Conrad will likely see the field this upcoming season. With more developmental time, I believe Conrad can emerge as the next Rhett Ellison.