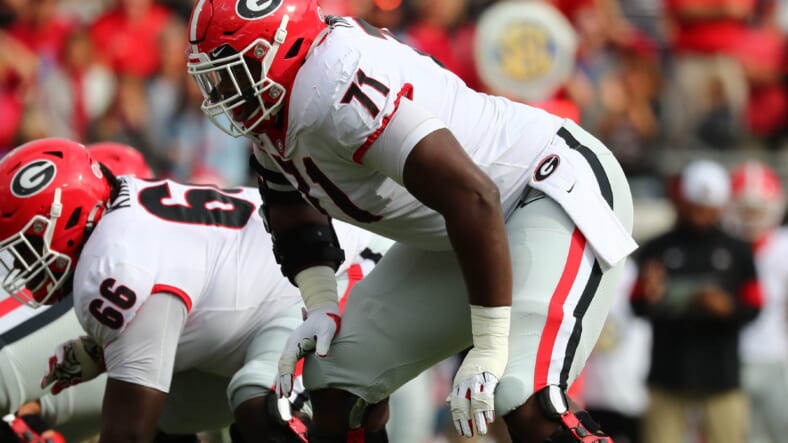 With the New York Giants winning two consecutive games, they have effectively put themselves out of Chase Young territory in the 2020 NFL Draft. While this isn’t necessarily a bad thing, considering the value of a winning culture for the young locker room core of Big Blue, it did ultimately cost them a shot at a generational pass rusher.

However, no player is ever a guaranteed success, which leads us to two other options that could provide a boost for different units. Clemson’s Isaiah Simmons and Georgia’s Andrew Thomas now lead the pack to become New York Giants players in 2020, and selecting either one would be a good move.

The New York Giants should expect Gettleman to harp on the trenches:

It’s likely that GM Dave Gettleman will likely be heading the charge once more for the Giants, and with his preference typically landing on the offensive line, the selection of Thomas could very well be justified.

The first-team All-American is considered to be the most dominant run blocker in the upcoming draft, due to his strength and speed moving linebackers at the second level. If Gettleman is keen on making Saquon Barkley even more useful, Thomas is the right choice here. At 6-foot-5 and 320-pounds, Thomas isn’t easily moved in the trenches, and considering his 13 starts at left tackle this season, the Giants could quickly move on from Nate Solder and plug the Bulldog right into the position.

Alternatively, Thomas could slot in at right tackle, replacing Mike Remmers, who Hal Hunter claims is the leader of the offensive line room.

However, Simmons also offers immense potential and value for the defense. If the Giants feature the 3-4 scheme next season, Simmons would pair well with Ryan Connelly. The Clemson product is often referred to as the best player on the field, and his statistical totals certainly advocate for that statement. His 93 total tackles, 14.5 tackles for a loss, 7.0 sacks, and two interceptions provide enough evidence to make him the Giants’ pick.

Simmons isn’t only an elite tackler, but he’s fantastic in coverage as well. He compares well with Colts’ Darius Leonard, as they both contain top-end speed and versatility unparalleled at the linebacker position.