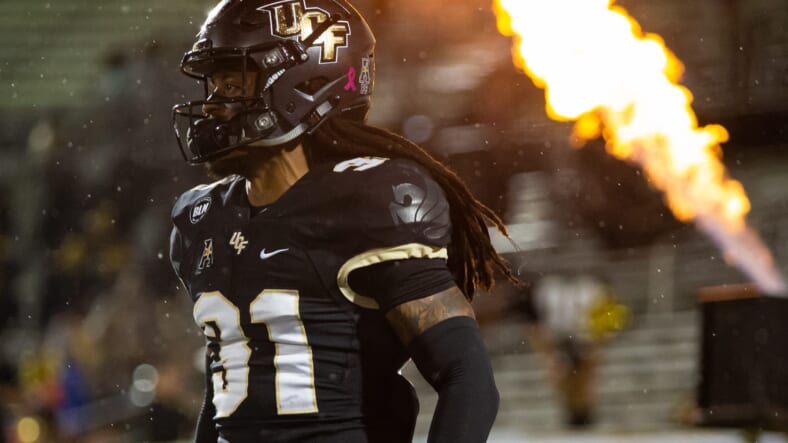 The New York Giants selected UCF Cornerback Aaron Robinson with the 71st overall pick after trading up five slots to leapfrog the Dallas Cowboys and several other teams.

The Giants previously traded back in the draft in the first round, acquiring another fifth-round pick from the Chicago Bears, which they utilized to make the jump and land Robinson, who has a few great traits to translate to the NFL level.

Robinson is most likely going to compete with Darnay Holmes as in the slot with the Giants, who have a strong secondary after acquiring Adoree Jackson for three years, $39 million this off-season.

However, this is an interesting move since the Giants desperately needed more interior offensive lineman, especially for a right guard spot that remains a weakness after letting Kevin Zeitler walk in free agency.

Some had Wyatt Davis out of Ohio State being the selection, given the Giants spent additional draft capital to move up. However, Robinson has fantastic athletic attributes and could end up being a premier slot interior corner with the right coaching.

Having fantastic pieces around him and Patrick Graham to help him adjust to the NFL level, Robinson should be able to make an impact in his first year as a third-round pick. Robinson had 10 pass breakups in 2020, showing off solid coverage skills.

A 4-star recruit that originally committed to Alabama, Aaron Robinson transferred to UCF and became the featured slot cornerback in 2019 and 2020 for the Knights. While he has some experience playing out wide, his best fit at the next level is likely in the slot. Robinson is a versatile defender that can function in both man and zone coverage and he will make the run defense better with his ability to fill and defend the D-gap. Overall, heâ€™s a physical player with quick feet and sufficient athleticism. The concerns with Robinson at the next level are his modest coverage instincts, ordinary ball skills, and proving the tackler he was in 2020 is what he will be moving forward and not the inconsistent finisher he was in 2019. Robinson has the ability to become a featured slot corner in the NFL, but he will need to become more sure of himself in coverage and play the game with better angles.