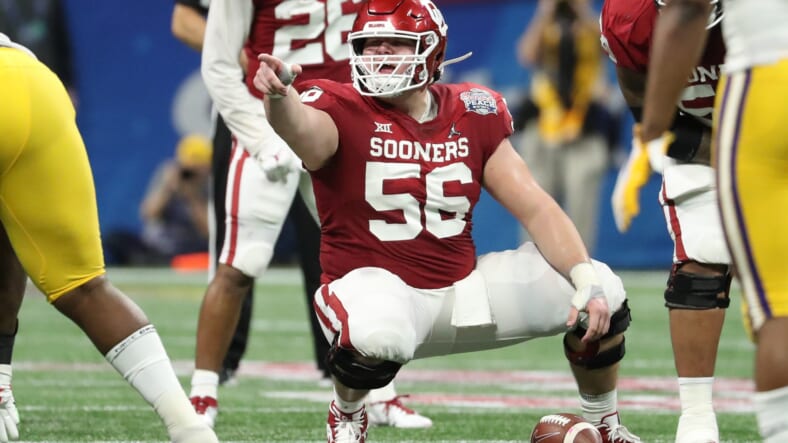 The luxury of a given NFL team having a solid foundation is that you can take the best player available in the first round of the NFL draft. The New York Giants, who currently sit at 11, have an interesting choice to make if a team presents a trade-back scenario. General manager Dave Gettleman has never executed a trade back, only moving up to acquire a player of his liking. The last time they made that decision, it turned out to be cornerback DeAndre Baker, who is no longer on the team.

With only six selections this year, the Giants could use a bit more draft capital to work with, which makes the idea of trading back even more justifiable. If there are no sure-fire players on the board at 11, a team like the New England Patriots could represent a solid option, considering they might be in the market for a new quarterback.

In this scenario, the Giants trade the 11th overall and 197th overall picks for the 15th and 46th overall selections from the Patriots. They add a mid-first-round pick and another second-rounder, which the Patriots can afford to lose given how many selections they have this year. Their masterful decisions lead to them having three compensatory picks, so they can pair a couple together and move back up into the second round if they see fit.

At the end of the day, thereâ€™s no shame in trading up to grab your quarterback of need, and the Giants manage to cash in because of their desire. Thereâ€™s no question the Giants can still land an impact player at 15, whether it be Rashod Bateman out of Minnesota or Elijah Vera-Tucker out of the USC. Going best player available is always a safe move, and with so much elite talent in this yearâ€™s first-round, this might be the smartest move the Giants can make.

Since the Giants now have two second-round picks, they can plug holes with their selections. Creed Humphrey out of Oklahoma would fit the bill well, considering heâ€™s capable of being a premium interior offensive lineman. With a wealth of experience, including 37 career starts, he has the experience to be a fantastic day one starter. He has fantastic football IQ and filled holes nicely in Oklahomaâ€™s power-gap scheme. The Giants use a similar system, so he would fit well as an interior lineman who could compete for the right guard spot immediately.

While Joseph Ossai is a bit raw, I believe he has the tangible traits and JPP-like motor to be a productive professional as an outside linebacker in the NFL. After playing inside linebacker two years ago, he made the transition to EDGE rusher, where he finally found a home and thrived in Texasâ€™ defense. As one of their most clutch players and one that simply never stops running and pursuing the ball carrier, I believe he fits the Giantsâ€™ scheme perfectly, and his story gives him a chip on his shoulder. With the right coaching, I believe Ossai could be a phenomenal player, and he fits the Giantsâ€™ scheme perfectly as a stand-up pass rusher and 5-tech in nickel packages.