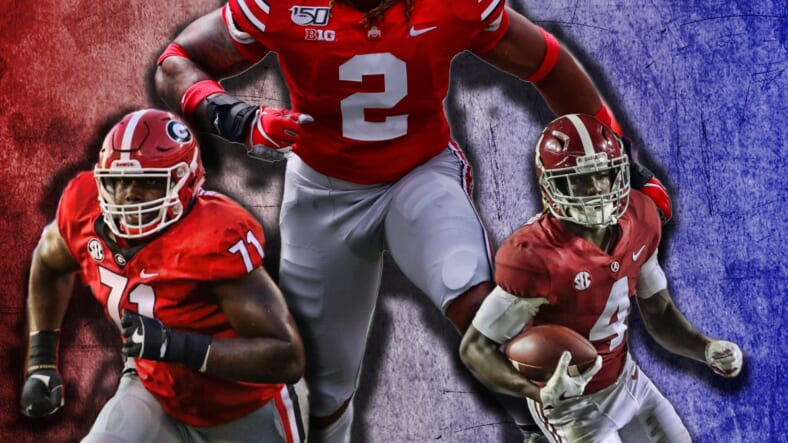 The New York Giants are currently sitting at a putrid 2-8 during their Week 11 bye. New York has six games left to play and, at this point, none of themÂ a “gimmes.” It is not too soon for the Giants to start looking ahead to the upcoming NFL Draft.

Whether the Giants are picking first, third, or fifteenth overall, these are the three prospects they should dream of drafting and do everything they can to secure at least one of these guys, whether that be via a draft-day trade or a 3-13 record.

The Giants have a huge need at offensive tackle. Nate Solder has not lived up to his contract so far and has played especially poor this season. Solder has allowed 8 sacks this season causing rookie quarterback Daniel Jones to get blindsided time after time.

Andrew Thomas would be a huge addition to the Giants’ offensive line. He is the top offensive tackle prospect in the draft and the Giants should be in a position to draft him if they want to. Thomas is Pro Football Focus’s highest-graded draft-eligible Power 5 offensive lineman in the country. According to PFF, “Thomas hasnâ€™t allowed a single sack or QB hit this year on his 200 pass-blocking snaps while heâ€™s powered his way to the fourth-highest run-blocking grade at the position.”

Andrew Thomas quick sets against Khalid Kareem, then gets in a good punch right as Khalid makes his move. Thomas then uses his strength to displace Kareem and ride him outside the pocket. The hand strength and grip Thomas shows to neutralize Khalid is very solid. #GiantsPride pic.twitter.com/tp16G1GlJu

The Giants traded away Odell Beckham Jr. this offseason, leaving them without a true number one on the outside. They have been getting sound production out of Golden Tate and Darius Slayton this season, but it wouldn’t hurt to bring in a dominant receiver via the 2020 NFL Draft.

Jerry Jeudy is as dominant as they come. The Alabama receiver has rare speed and athleticism combined with extraordinary route running and catching ability that you just do not see very often.

As a sophomore in 2018, Jeudy was unguardable with 68 receptions for 1,315 yards and 14 touchdowns. Jerry’s junior season has been no different. Through 9 games in 2019, Jeudy has already caught 57 passes for 753 yards and 9 touchdowns. Jerry Jeudy is a true playmaker and is bound to be towards the top of the Giants’ draft board.

Jerry Jeudy's moves look like they're straight out of a Thriller music video pic.twitter.com/KlLSudm72I

Chase Young would be a slam-dunk pick for the New York Giants. Their lackluster pass-rush could use the best prospect in the draft class. Young has been consistently dominant in his collegiate career.

This year, Chase Young has been a force to be reckoned with. Chase Young has improved his sack total in 2019 to 13.5 sacks in only 8 games. He has also forced an insane 5 fumbles, as well as racking up 15.5 tackles for loss. This is historic production through 8 games. According toÂ Pro Football Focus, Youngâ€™s 13.5 sacks are â€œare the most by any defender through the first nine weeks of a college football season since Carl Nassib had the same amount in 2015.â€

Thats it, thats the tweet.#GiantsPridepic.twitter.com/B0i8Fk9FSz