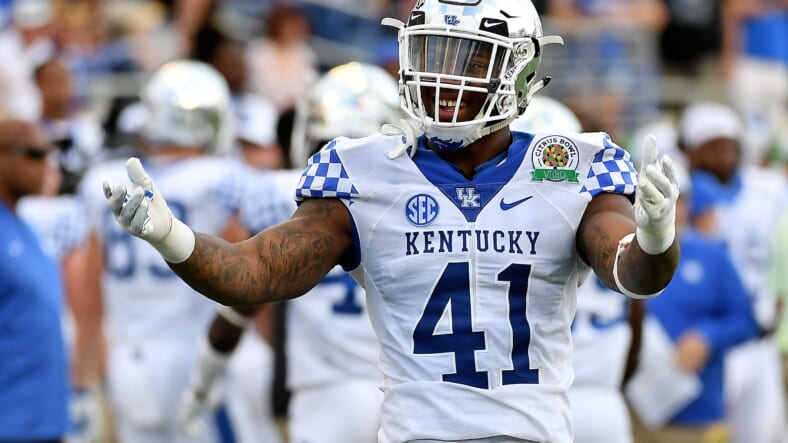 The New York Giants will be in a quality spot to snag one of the top pass-rushers in the 2019 NFL Draft, given they pass on a quarterback.

The Giants’ defensive front is in need of assistance, as B.J. Hill, Dalvin Tomlinson, and RJ McIntosh aren’t the most capable experienced defensive lineman. General manager Dave Gettleman has allocated plenty of resources towards the offensive line, but now it’s time for the defensive to receive the brunt of the funds.

I expect outside linebacker Lorenzo Carter to play a more prominent role this upcoming season, but they still need a premium pass-rusher to upgrade the unit as a whole.

Three premium option the New York Giants can grab at No. 6:

Allen is one of the more exciting options in the draft, and the likeliness of him being available at No. 6 is dropping with every passing day. He’s a lanky athlete with elite strength and instincts close to the line of scrimmage. He would be an above-average run-stopped and pass-rusher for Big Blue.

With the Giants trading Olivier Vernon, replacing him with Allen would be a great move, and it would cut the costs tremendously. The most exciting aspect of Allen is his dynamic style of play – the ability to float into coverage but also fill gaps and get after the quarterback makes him a top defensive prospect.

While Oliver only recorded three sacks last season, he’s an Aaron Donald type of player in regard to his frame and motor. He’s a menace at the line of scrimmage and disrupts entire plays with his tenacious mentality and ability to fight through double teams – 14.5 tackles for a loss attests to that truth.

Pairing Oliver with Hill and Tomlinson would immediately make the Giants’ three down lineman one of the better units in the league. However, his Ed’s lack of NFL size and strength at the DT position could cause problems for him. His speed off the line of scrimmage is elite and noteworthy, but he will need to add some size to his 6’2″, 287-pound frame.

After Sweat was diagnosed with a hidden heart condition his stock began to drop. However, the ailment was deemed non-threatening so his availability shouldn’t be hurt. Sweat ran a record-breaking 4.41 40-yard dash for a defensive lineman at the NFL Combine. His long and athletic frame provides tons of optimism in regard to the translation of talent at the next level. There’s room for him to grow as well on his already impressive 6’6″, 260-pound frame.

I wouldn’t rule him out as a potential option for the Giants at No. 6, especially after his dominant 2018 campaign where he racked up 12 sacks and 14.5 tackles for a loss. One of the more appealing aspects of the prospect is his adaptability due to his body. He can fit in as an outside linebacker in James Bettcher’s 3-4 scheme opposite Lorenzo Carter. That would be a tantalizing duo with their outside speed and unique blend of length and agility.

Some have Sweat falling into the top-20, but taking him at No. 6 could be justified given the Giants’ scheme.