New York Giants: There is still time to upgrade the offensive line 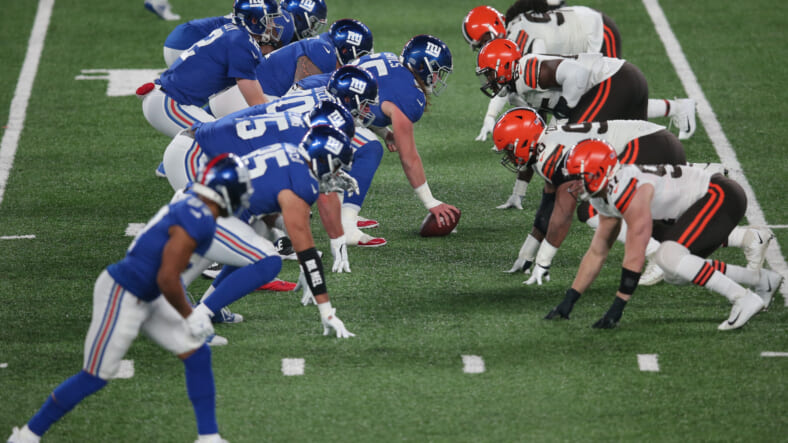 The New York Giants just wrapped up a phenomenal 2021 NFL Draft. Dave Gettleman and the Giants traded down twice to get future picks and landed two first-round talents. Their draft class has been met with a ton of praise. However, one criticism of the Giants’ draft is that they failed to address the offensive line.

The Giantsâ€™ pass-block win rate in 2020,Â according to ESPN, ranked dead-last in the NFL at 46%. Their run-block win-rate ranked 18th at 70%, which is about average or slightly below. So while the Giants did upgrade Daniel Jonesâ€™s weapons in free agency, fans feel like they still desperately need to fix the offensive line in front of him.

How the Giants can still upgrade their offensive line

There are also free agents currently on the market for the New York Giants to consider. One free agent offensive guard that makes sense for the Giants is Trai Turner. The former Carolina Panthers and Los Angeles Chargers offensive linemen has ties to Dave Gettleman. Turner was once regarded as one of the best offensive linemen in the NFL, making consecutive Pro Bowl appearances from 2015 to 2019. He struggled mightily in 2020, but he is only two years removed from a Pro Bowl season. The Giants could take a chance on Turner and hope to see him get his career back on track in 2021. Other intriguing free agent offensive linemen available are Lane Taylor, James Carpenter, Bobby Massie, Rick Wagner, and many others.

In addition to the offensive linemen already available on the market, there is certainly a new crop of hog mollies that will hit the market in the summer. As training camp inches closer, so does the wave of new cuts. Throughout training camp and preseason, teams will make cuts and a plethora of roster changes as they trim the fat and get down to the designated 55-man roster. The Giants will need to keep a close eye on the waiver wire this summer if they still want to find upgrades on the offensive line.