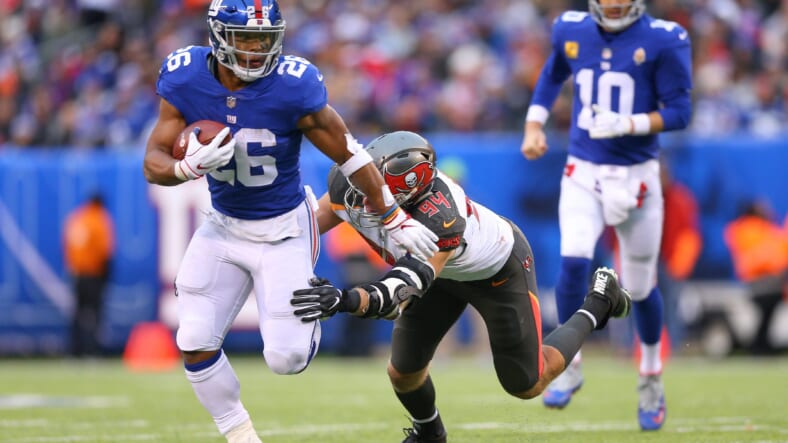 The season is done and over for the New York Giants, but the era of Saquon Barkley being a team leader is only just beginning. Barkley has been great all season, of course, but with this game, he enters the record books. It’s not as good as the team making the playoffs, but it’s still a positive accomplishment for a first season where Barkley entered the league to much debate.

But by now, it should be clear that the Giants didn’t lose value by drafting a running back with the second pick rather than a quarterback. Rather, they likely gained value by picking up Barkley, who finishes the season with the third most rushing yards for a rookie ever, while playing behind an offensive line that has been awful at worst and only serviceable at best.

Everything was working against Barkley this season, from the offensive line to the team’s 1-7 start, which could have easily taken away the motivation to perform in the second half of the season, and he still managed to break the 2,000 total yards from scrimmage mark. That’s better than any rookie running back from almost the last two decades.

Now that it’s all said and done, it can be said that the rise of Barkley is the best thing to happen to the Giants this season. It looks likely that Eli Manning will return for another year, but his run as the starting quarterback isn’t going to last forever. Odell Beckham Jr. has been great since he was drafted, but injuries in the past two seasons have left a mark on his recent statistics. Both issues were relevant for the Giants this year, but Barkley was a consistent bright spot.

“I donâ€™t know, to be completely honest,” Barkley said after the Dallas game, on the subject of Manning’s fate last year. “The only thing I know is that he has a lot of ball left, that this team believes in him. Even though the season didnâ€™t end up how we wanted it to, we were in a lot of games, we just have to finish those games. I really canâ€™t answer that question, but all I have to say is I know Eli has a lot of ball left in him and I know we believe in him.”

But whether Manning returns as the starter next year isn’t the most relevant thing. The fact of the matter is that the Giants have found the centerpiece player for their offense. Barkley’s 1,307 yards on the ground placed him at number two in the rushing yards standings, and it’s a fair assumption that the number of yards will increase if the quality of the offensive line increases during the offseason. Additionally, experience makes a big difference, and Barkley will have more of it going into next year.

If there’s one point to take away from 2018, it’s this one. The Giants might draft a quarterback, or they might not. But regardless of their decision, they already have a piece to build around going forward, both in this offseason and in future years. That’s more than most teams drafting this high up can say, and while the NFL is a quarterback’s league, having a great running back will make the job easier on any quarterback who starts in 2019… Whether that’s Manning, or anyone else.