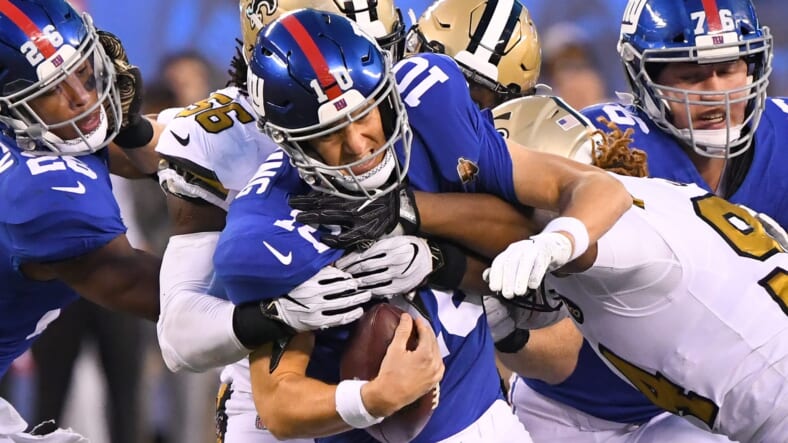 Do not let the final score confuse you. A three point loss doesn’t sound like the worst thing in the world, but the fact of the matter is that one of the New York Giants touchdowns only came in garbage time. Barring a miracle onside kick recovery, getting a win was already impossible by the time the touchdown happened. And when you look at the scoring that happened when the Giants still had a chance to win, they really should only have finished the game with 12 points.

Before the game, many assumed that the Atlanta Falcons and their multi-faceted offense would be the problem for New York. In reality, it was the defense that held the Falcons to a reasonable 23 points, and the offense that blew it and couldn’t take the win on Monday Night Football.

Now, this one isn’t on Eli Manning. Some will try to make this into a quarterback issue, but that’s not the case. Just look at the numbers, if Manning is who you want to blame. The quarterback threw for 399 yards and while his only touchdown came at the end, when victory was nearly impossible and it could be considered garbage time, his quarterback rating was only a few points lower than Matt Ryan’s and he was sacked four times.

Those sacks disrupted the Giants offense on multiple occasions and the sacks number doesn’t include other times when pressure from the Falcons defensive line hurt the passing or the running game. One of the most notable times was when the Giants were driving, stringing together good plays, and then Grady Jarrett easily slipped around Will Hernandez to land a hit on Manning and effectively end the drive because of the loss of yards.

That’s not to say that all of the blame is on Will Hernandez. He’s a rookie, after all, and it’s hard to expect a rookie to compete with one of the better rushers in the league. But Nate Solder is no rookie, and he still hasn’t figured it out. Will Solder figure it out eventually?

Maybe, maybe not. His previous success, which convinced the Giants to give him such a large contract, came with New England. A team known for having great schemes that turn mediocre players into stars. Those same stars then flop and are unable to replicate their success when moved to other systems. On the other hand, Solder hasn’t had a full season to get used to playing under this system, and playing as an offensive lineman is much more complicated than it looks on TV.

Even so, Solder isn’t playing like a very highly paid tackle right now, regardless of whether or not there’s improvement later. Saquon Barkley only had 43 yards on 14 carries, and that comes to an average of 3.1 yards per rush. By now, we’ve all seen what he can do when the blocking is even semi-good, so the fact that Barkley couldn’t make 50 yards this game should say something about where the current problems with this team are.

When your most dynamic player is shut down because you can’t support him properly with blocking, which could be seen clearly when Barkley failed to punch the ball into the end zone on third down when the Giants were very close to scoring, it makes it clear what needs to change.

Unfortunately, those changes won’t come until the draft and free agency. The offensive line was already rebuilt once this year. And as it turns out, that rebuild wasn’t as good as we thought it was.