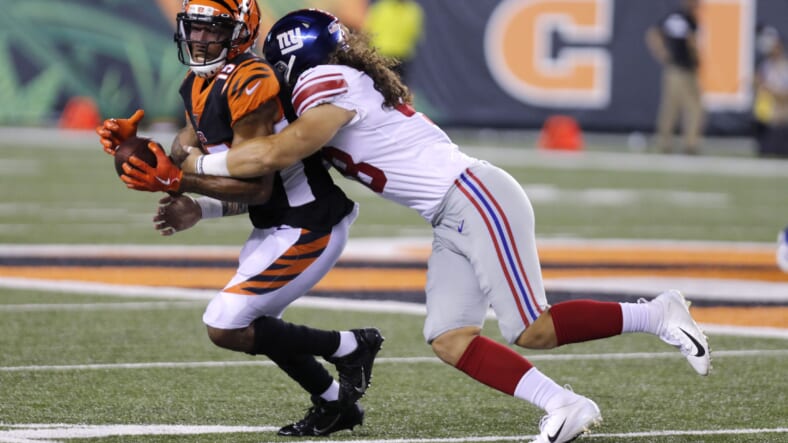 While most are focused on New York Giants rookie passer Daniel Jones, most are forgetting about the reserve players fighting for a roster spot. The spotlight will focus in on one specific athlete in this article, an undrafted one that has been one of the highest-rated defenders this preseason period.

Linebacker Josiah Tauaefa of Texas-San Antonio is the undrafted surprise that has made waves with his performance during the preseason. While his name is seldom called during practice, he’s quietly left his mark. PFF gave him an 86.8 grade, the seventh-highest graded rookie so far.

Undrafted free agent Josiah Tauaefa has been a pleasant surprise for the New York Giants so far this preseason. Tauaefa has seen most of his preseason time in coverage where he has recorded four coverage stops, but he has also excelled in his limited action against the run and in the pass-rush. The former UTSA product was a legitimate threat as a blitzer in college, as he finished his three-year college career with 63 pressures and a 94.0 pass-rush grade his final season.

His 12 total tackles, sack, and special teams tackle have earned him praise from the coaching staff and fans that have a keen eye for undrafted free agents looking to make a run at a roster spot.

The three-year veteran is in line to earn a roster spot solely due to his experience and familiarity with defensive coordinator James Bettcher. Tauaefa has made a case for himself to steal his role, but he’s more likely to end up on the practice squad than on the active roster.

I still think B.J. Goodson should make the 53 man roster but if not, it should be Josiah Tauaefa. I like his versatility and his pass rush skills plus he plays with an absolute motor. pic.twitter.com/5bpYbgk4AO

Playing against second and third-string players only provide so much information to keep players on the roster after cuts. The most exciting aspect of Josiah is his physicality and desire to hit with power and precision.

Check out this his lone sack:

Troy Polamalu…I mean Josiah Tauaefa, lays a big hit on the QB for the sack. Josiah is someone that intrigues me, don’t think he’ll make the roster, but maybe they like him enough for the PS? pic.twitter.com/f2O2MPFBuS

He’s certainly a player to keep an eye on during Thursday’s game against the New England Patriots. It will be his final opportunity to prove his worth in front of the coaching staff.