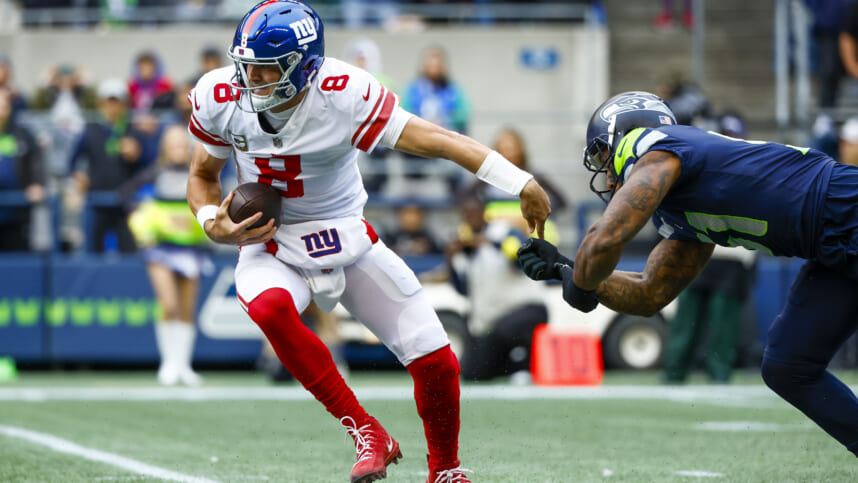 The New York Giants have fallen to 6-2 on the season after an ugly 27-13 loss against the Seattle Seahawks today. The Giants’ offense was completely dominated by Seattle as the Seahawks moved to first-place in the NFC West with the win. Big Blue will head into its bye week at 6-2 with the focus on making adjustments to push into the playoffs by season’s end. The Giants’ four-game winning streak comes to an end with this loss.

Main takeaways from Giants vs Seahawks

Winning the turnover battle was the key to victory for either side in this matchup. Unfortunately the Giants found themselves on the losing end of that battle, ultimately costing them the game. Punt returner Richie James fumbled the ball twice, sinking the Giants through special teams.

Offensively, the Giants were stagnant. Their inability to move the ball on the ground or through the air cause them to lose. Daniel Jones completed only 17 of his 31 passing attempts for 176 yards and 0 touchdowns. Jones was pressured frequently, sacked five times for a total loss of 29 yards.

Saquon Barkley had arguably his worst game of the season thus far. The star running back only managed to total 53 yards and 1 touchdown on 20 carries. He added 3 receptions for nine yards with one drop, as well. The Giants’ leading receiver on the day was Darius Slayton as he hauled in five of his six targets for 66 yards.

The Giants’ defense did what it could, but the offense did not capitalize on the defense’s performance. New York sacked Geno Smith three times in the matchup and Adoree’ Jackson forced and recovered a Tyler Lockett fumble that led to seven points by the offense. The Seahawks offense did not manage to win time of possession, only totaled 277 yards, and still came away with the win.

In the end, the Giants’ inability to win the turnover battle was too much to overcome. The New York Giants beat themselves on the road, causing them to pick up their second loss of the season. With nine games left on the schedule, the upcoming bye week will be crucial as the Giants look to regroup and make a playoff push in the second half of the season.