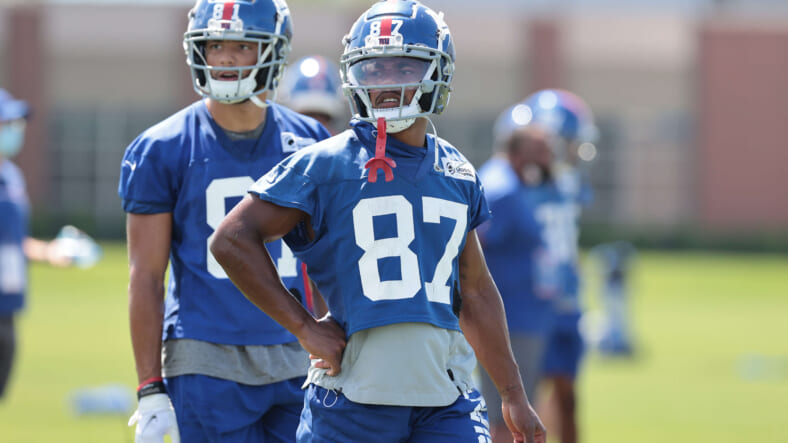 The New York Giants have struggled to get their passing game going through five weeks, and a big part of that is due to the absence of Sterling Shepard. As their top slot option and security blanket for Daniel Jones, losing him has been catastrophic.

However, even though two weeks when Shepard was present, he didnâ€™t make a significant impact. He only tallied 76 yards and eight receptions against Pittsburgh and Chicago before suffering a turf toe injury that has kept him out since.

The Giants inevitably put him on injured reserve, and he is likely to miss the week six contest against the Washington Football Team as the injury lingers.

Did not see Sterling Shepard at practice (makes sense due to the conditions). Again, safe to rule him out for this week. TBD for the Eagles game next Thursday. Practice squad WR Binjimen Victor was working on the side with a trainer.

The Giants have looked Darius Slaytonâ€˜s way more than not in recent weeks due to Sterlingâ€™s absence, as veteran pass-catcher Golden Tate hasnâ€™t managed to get anything going.

Management elected to elevate Austin Mack from the practice squad and waive Damion Ratley after a costly offensive passing interference call against Dallas in week five.

Mack, who has given defensive backs trouble all season long and during training camp, will finally get his chance to suit up and prove his worth in an NFL game.

As for Shepard, turf toe can be a multiple week injury, as it has been. I donâ€™t expect him to play until week seven against the Philadelphia Eagles, which will be an essential division game, especially if they overcome Washington in week six.

What does Sterling Shepard bring to the New York Giantsâ€™ offense?

Even though Shepard didnâ€™t make a significant impact in the receiving game through two weeks, his run blocking is one of the best in the NFL. His ability to seal the outside matches perfectly with Jason Garrett outside zone blocking scheme.

However, consistency and continuity in the new offense are essential for players like Shep, who couldnâ€™t develop a rhythm. Remaining healthy is essential for the 27-year-old receiver, and he has been unfortunately injury prone the past few seasons, notably with concussions.