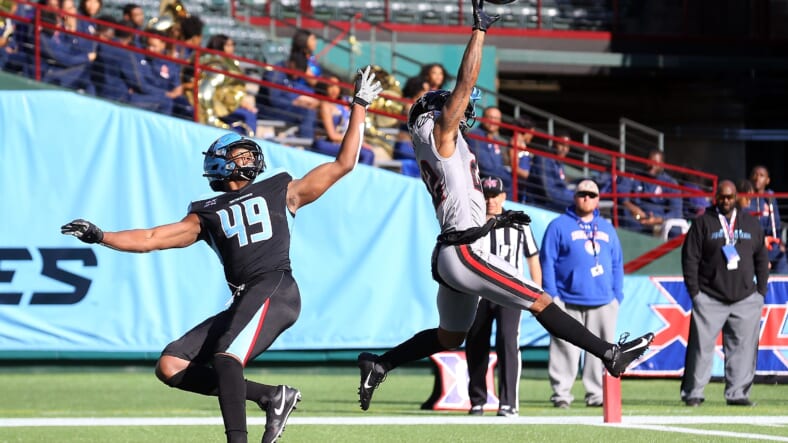 ARLINGTON, TEXAS – MARCH 07: Dravon Askew-Henry #22 of the New York Guardians breaks up a pass intended for Donald Parham #49 of the Dallas Renegades at an XFL football game against the Dallas Renegades on March 07, 2020 in Arlington, Texas. (Photo by Richard Rodriguez/Getty Images)

The New York Giants are signing former XFL defensive backÂ Dravon Askew-Henry. Askew-Henry was most recently with the New York Guardians, prior to the new football league suspending operations and filing for bankruptcy.

The XFL shutting down left a large sum of employees jobless. Until today, Dravon Askew-Henry was one of those left jobless by the XFL’s bankruptcy. Now, the 24-year-old defensive back from West Virginia University is signing with the New York Giants.

Dravon Askew-Henry, a former New York Guardian, is being added to the Giants’ youthful secondary. New York has invested plenty of assets and draft capital into their secondary in recent years. Askew-Henry is the latest addition.

With the sports world being halted by the world pandemic coronavirus, NFL teams are unable to administer medical tests to free agents. So even though the Giants and Askew-Henry have come to an agreement, the transaction is contingent upon Askew-Henry passing a physical when travel restrictions are lifted.

Dravon Askew-Henry played in four games for the New York Guardians this season. In those games, he totaled 12 combined tackles. Askew-Henry stands in at 5-11 and weighs 187 pounds. This will not be Dravon’s first stint with an NFL team.

Askew-Henry went undrafted in 2019, despite impressive performance at the collegiate level. With West Virginia, Dravon startedÂ 51 games in four seasons, totaling 215 tackles, 6 interceptions, and 10 passes defended. Dravon Askew-Henry was later signed by the Pittsburgh Steelers as an undrafted free agent.

Now, a year later, Dravon has signed with the New York Giants. He will be brought in as a solid depth piece in the secondary. He is a safety but could potentially slide in at slot cornerback, one of New York’s weakest positions. This is a quality, out-of-the-box signing by Dave Gettleman and the Giants. Dravon Askew-Henry is a low risk, high reward player that could compete for a starting role on the defense.