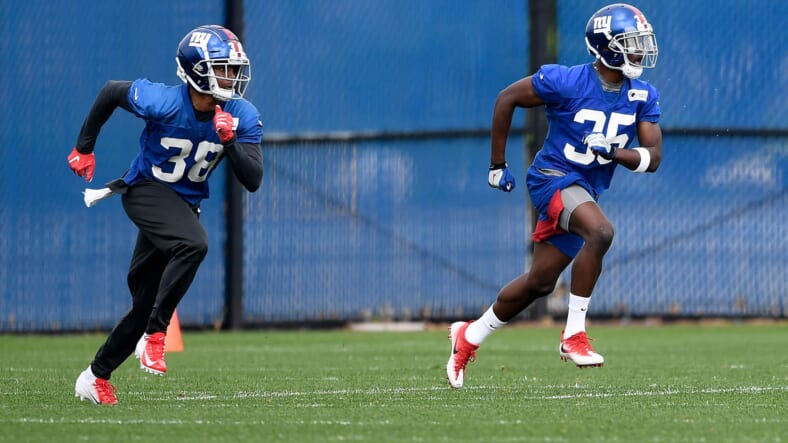 Training camp is coming up in July for the New York Giants – before that happens, however, the team will have mandatory minicamp following the finish of OTAs. The first day of that mandatory minicamp already happened, giving us a look at several of the season’s most anticipated players. Daniel Jones, DeAndre Baker, Jabrill Peppers, and others took to the field – and reports are coming out about what we can take away from the first day of minicamp.

Head coach Pat Shurmur had some things to say about a number of players following the day’s activities.

“He obviously moves around well. He is down there around the 4.6 mark,” Pat Shurmur said while talking about Daniel Jones, and how his running skills from college translate to the Giants. “I think he had 17 rushing touchdowns. He can move around and that is a huge part. If a quarterback can move around, not so much on just structured runs but the ability to be able to create a play within a passing play, I think he can do that.”

Eli Manning’s lack of mobility is something that has been criticized, especially last season, so it will be interesting to see the differences offered by Jones’ skillset, even if both players are primarily pocket passing quarterbacks.

Shurmur also talked about the secondary and particularly, Deandre Baker and new safety Jabrill Peppers. “I think he has made a play or two at each practice. Again, just learning how to compete at this level. Unfortunately, you canâ€™t do a whole bunch of bump and run and press coverage, so the corners are at a little bit of a disadvantage. However, you need to learn to play off and for him to be able to make plays in those situations is good,” Shurmur said about Baker.

But it looks like Peppers is already off to a quicker start comparatively, as the more experienced player between the two. “It doesnâ€™t really apply to Jabrill because his leadership was felt immediately…” Shurmur said when asked about Pepper’s development as a leader. “He picked up quickly what we were doing on defense well and he is extremely smart. He is very tough and very competitive.”

There largely hasn’t been negative press around the Giants since offseason activities began. While that may be a result of moving on from a number of players this offseason, time will tell whether dumping said players was a wise move for the team’s success on the field.