New York Giants: Should Rod Smith Or Wayne Gallman Be The Runner Behind Barkley? 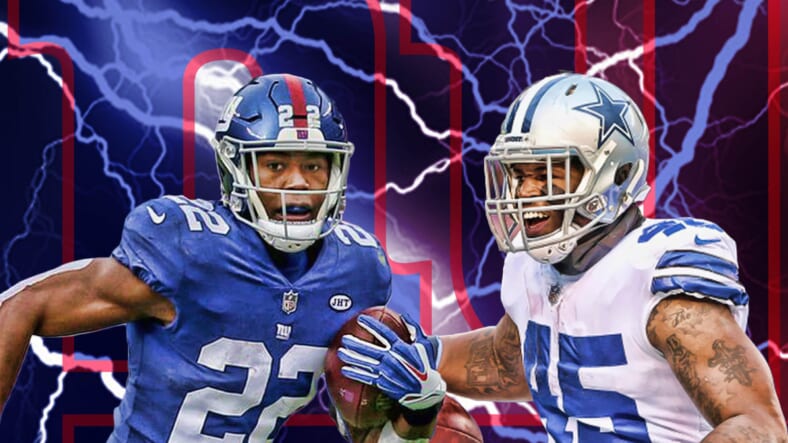 The New York Giants have arguably the best running back in the league with Saquon Barkley. Saquon won AP Offensive Rookie of the Year in 2018 behind a league-leading 2,028 total yards from scrimmage.

Saquon Barkley is a generational talent, but the Giants have a solid all-around backfield. Wayne Gallman has provided quality play as the number two back over the last two seasons. Despite this, the Giants added another running back into the mix in 2019.

The Giants signed former Dallas Cowboys running back Rod Smith earlier this offseason. Rod Smith was signed to be a solid depth piece behind Saquon Barkley, along with Wayne Gallman. Both players have been backup running backs their entire career and will have to compete to solidify themselves as the number two running back on Big Blue’s roster in 2019.

What Wayne Gallman Brings To The Table:

Wayne Gallman was drafted by the Giants in the 4th round of the 2017 NFL Draft. He was a solid running back in college at Clemson and looked to be a steal for New York in the middle of the draft.

Gallman has not found himself receiving extended playing time with the Giants thus far. Gallman was the 2nd running back on the roster in his rookie season. The Giants opted for veteran Orleans Darkwa as their starting running back in 2017. He went on to rush for 751 yards and 5 touchdowns.

Despite his limited playing time, Gallman flashed his potential in 2017. He ran the ball 111 times, gaining 476 yards on the ground with 4.3 yards per carry. Gallman also provided quality snaps as a receiver in 2017. He caught 34 passes on 48 targets for 193 yards, 5.7 yards per reception, and 1 touchdown.

Saquon Barkley can do it all, but the Giants need to be careful not to run him to the ground this early in his career. Gallman did not receive much playing time in 2018 due to Barkley’s incredible production.

Wayne still added quality snaps as a receiver out of the backfield, though he lost reps there, too. His yards per reception improved to 6.4 yards, but he only caught 14 passes on 22 targets and did not score a receiving touchdown.

Wayne Gallman has been a solid backup running back for the Giants over the last two seasons. However, New York has added another running back to the mix.

Wayne Gallman has brought a nice balance of running and receiving abilities to the Giants’ backup running back position over the past two seasons. However, he will have to beat out Rod Smith for the second string position.

What Rod Smith Brings To The Table:

Rod Smith has been in the NFL for 4 years. He has only started in 2 games but has played as a second string running back in 31 games over the last two seasons.

The Dallas Cowboys had Rod Smith back up their exuberant, young running back, Ezekiel Elliot. Elliot has been one of the best running backs in the league since being drafted in 2016. “Zeke” was a First-Team All-Pro in his 2016 rookie campaign and lead the NFL in rushing yards in 2018.

Rod Smith had the opportunity to backup Elliot for the last two seasons. He is certainly used to playing behind an extra-talented running back, so backing up Saquon Barkley should be no problem for Rod Smith.

Smith struggled in 2018, Â averaging just 2.9 yards-per-carry. However, he had a solid 2017 season averaging 4.2 yards-per-carry on 55 rushing attempts, totaling 232 yards and 4 touchdowns. Similar to Gallman, Smith has also demonstrated the ability to be a receiver out of the backfield.

In 2017, Rod Smith caught 19 passes on 23 targets. He racked up 202 receiving yards and 1 touchdown. This touchdown was an impressive 81-yarder scored against no other than the New York Giants.

Rod Smith was not as effective in 2018, which might be why the Cowboys decided to move on from him. He was not given many opportunities in 2018 with a decrease in carries and receptions. However, in a better offensive system with Pat Shurmur and the Giants, Rod Smith could see some quality playing time and impress as he did in 2017.

Barkley will continue to be an all-world talent for the New York Giants in 2019 and beyond, but it is imperative for the Giants to get the backup running backs in the mix in order to keep Barkley from wearing down.