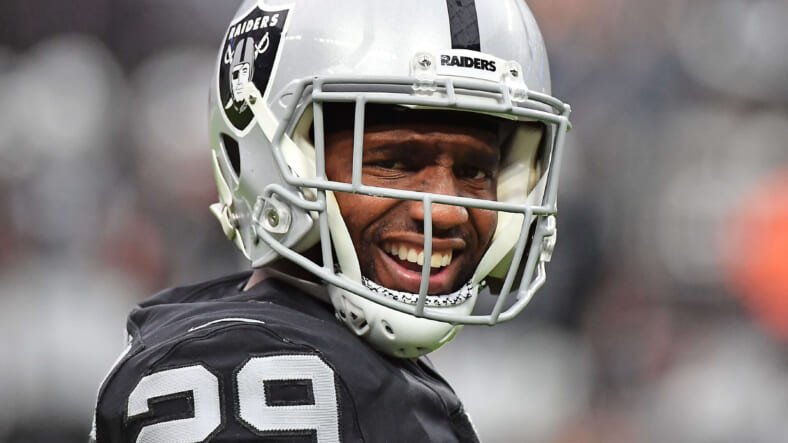 The New York Giants are preparing to face the Las Vegas Raiders on Sunday after a heart-breaking loss on Monday Night. The 2-6 Giants will play the 5-2 Raiders coming off a bye in Week Eight. The hobbled Giants offense will have to find a way to attack a solid Raiders defense that features one of the best cornerbacks in the NFL: Casey Hayward Jr.

Sterling Shepard, Saquon Barkley, Kenny Golladay, and Kadarius Toney have all been hobbled and missed games with injuries this season. New York’s offensive playmaker group has been depleted and left Daniel Jones little to work with. Entering this Week 9 matchup, Jones and the Giants’ offense have a tall task ahead in the passing game. The Raiders’ defense features cornerback Casey Hayward, a ten-year NFL veteran in the middle of a phenomenal season.

Casey Hayward has played a long and successful career in the NFL. After being drafted by the Packers in 2012, Hayward joined the Chargers in 2016 before ending up on the Raiders in 2021. At 32-years old, Casey Hayward is exceeding all expectations in his first season with the silver and black.

The Las Vegas Raiders are enjoying a superb season out of their veteran cornerback. The Raiders signed Casey Hayward Jr. to a one-year, $2.5 million contract this offseason. They took a chance on a veteran coming off of an off-year and struck gold.

Casey Hayward Jr.’s 83.3 coverage grade is the tenth-highest among cornerbacks in Year 10 of their career or later since 2006 (PFF). Hayward has allowed only a 47.8% completion percentage and 109 yards in coverage this season. Casey has also logged 18 combined tackles and 4 passes defended in 7 starts.

Daniel Jones and the New York Giants are going to have a tough time throwing against Casey Hayward. Jones and his top receiving threat (whoever that ends up being in this injury-riddled offense) will struggle to get on the same page. The Giants should game plan to throw the ball away from Casey Hayward Jr. as he has excelled in coverage all year and is preparing to cause some trouble against the Giants on Sunday.