New York Giants Shine In Area That has Been Their Demise 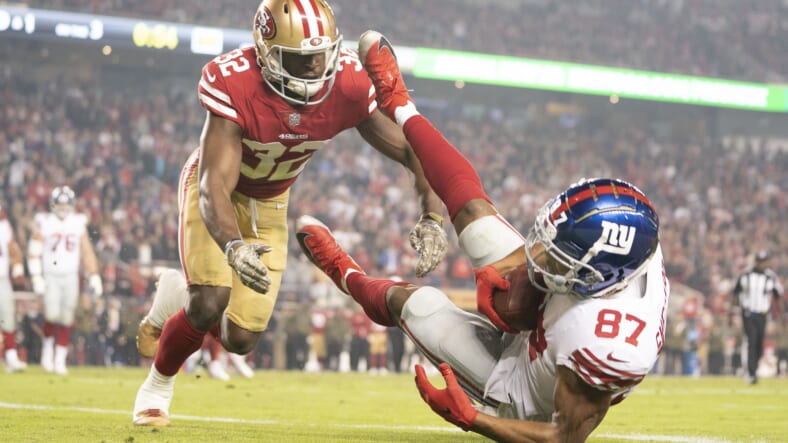 The New York Giants managed to pull off a slight 27-23 win over the San Francisco 49ers on Monday night, earning them their second win of the season. The Giants currently rank as the third worst team in the league, but several progressive steps were made in the victory.

One of the most glaring improvements was the offensive line, specifically at right guard with Jamon Brown. The former Los Angeles Ram started his first game for Big Blue against the 49ers, playing a key role in Eli Manning’s first touchdown pass to Odell Beckham Jr. in the red zone.

Watch newly acquired RG Jamon Brown #78 keep the pocket clean so Eli Manning can find OBJ open in the end zone for the TD. This is what a good Offensive Lineman looks like and does! #NYGvsSF #GiantsPridepic.twitter.com/Uv5lBAGJzT

Here’s a clip of Brown sliding to the middle of the pocket and stopping an incoming pass-rusher in his tracks, giving Manning the time he needed to find his most lethal offensive weapon in Odell Beckham Jr.

The Giants have struggled heavily with stunts from opposing defenses this season, which ultimately got Patrick Omameh benched and then cut. He simply didn’t have the mental wherewithal to anticipate pass-rush techniques. Brown on the other hand is more than capable. The Rams released the Louisville product after missing the first two games of the season due to a violation of the league’s substance abuse policy.

General manager Dave Gettleman made it a priority to claim Brown off of waivers – several teams also applied for his services. So far, he has been a stellar addition to the team and will hopefully be a long-term solution at the right guard position.

The New York Giants had a “team” effort:

Monday night’s win wasn’t just an individual master-piece, it was a team win. From start to finish the offense made plays and the defense caused key turnovers. While the defense looked a bit fatigued, we can factor in the bad air-quality and apply it as a justification for their lack of effectiveness. Considering the 49ers allowed 27 points to a lackluster Giants offense, you can tell something was off in San Francisco.