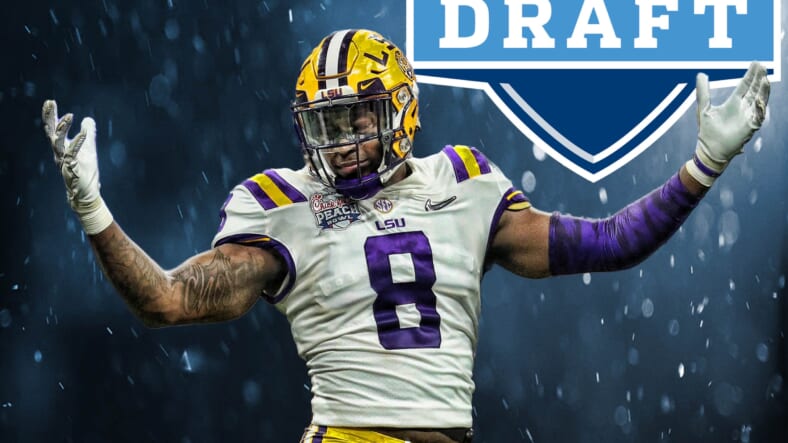 TheÂ New York GiantsÂ are preparing for the 2020 NFL Draft like every other team during COVID-19, facetime interviews with prospects, and zoom meetings with team personnel. The world pandemic coronavirus has put a halt on the entirety of the sports world- except for the NFL Draft. The draft will look a lot different this year, but it is still set to take place on April 23rd.

Regardless, the show must go on. Teams need to familiarize themselves with these prospects somehow. Of course, they will watch hours upon hours of game film as they do every year. But since these teams cannot meet with these prospects in-person, they will have to settle for virtual meetings to get to know the character behind every prospect.

According to Jordan Reid of The Draft Network, first-round linebacker prospect Patrick Queen has an upcoming meeting scheduled with the Giants in the coming days. The linebacker out of LSU has already met with the Packers, Eagles, and Ravens. His ability to command a defense, demonstrated in LSU’s National Championship-winning 2019 season, has garnered plenty of interest from NFL teams ahead of the 2020 NFL Draft.

It is highly unlikely that Patrick Queen slips into the second round. But if he does, it would be a home run selection for the Giants. If the Giants were to draft Queen, it is more likely that it would be in a trade-down scenario later in the first round.

Patrick Queen is an excellent coverage linebacker with top-notch instincts in zone coverage.Â According to Pro Football Focus, Queen never allowed a reception longer than 20 yards on 488 career coverage snaps. Check out this remarkable interception that Patrick Queen made versus Alabama below:

One other thing to note here for the Giants is that they are still interested in drafting a top-tier linebacker despite signing Blake Martinez in free agency. New York recognizes that Martinez is not a coverage linebacker (allowing a completion percentage of 83.8% when targeted).Â Still, in dire needÂ of a linebacker who can guard tight ends, the Giants are doing their due diligence on the draft’s top prospects. This indicates thatÂ fan-favorite prospect Isaiah SimmonsÂ is still on the Giants’ draft board. Signing Blake Martinez will not discourage New York from drafting a linebacker early in 2020.