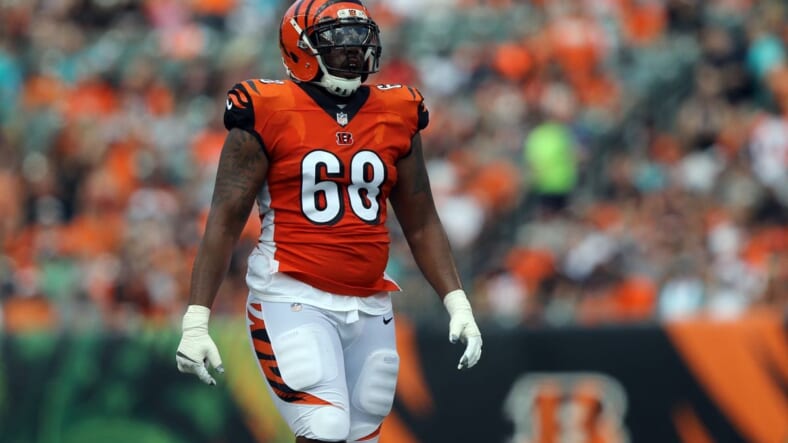 The New York Giants have rebuilt their offensive line over the past couple of seasons. Dave Gettleman has made it his main point of emphasis. The Giantsâ€™ offensive line looks ready to be a good unit after years of sinking towards the bottom of the league.

Finally, the Giants have potential Pro Bowl level players on their offensive line. But tonight, the Giants defense will get to play against a particularly poor offensive line unit. A unit comprised of a couple of former New York Giants.

One problematic player that Giants fans should remember is Bobby Hart. Not only was he a poor performer as the Giantsâ€™ right tackle, but Hart also had a sour attitude.

Prior to being waived by the Giants, Bobby Hart â€œshut down.â€ He informed the team that he was not going to play one week, maybe because he just did not feel like it. Dave Gettleman does not have the patience for actions like this, so Hartâ€™s time in New York came to a close soon after.

Bobby Hartâ€™s move to Cincinnati did not exactly make him a better player, however. In 2018, PFF grading ranked Bobby Hart as the 70th best tackle in the NFL out of 82 total.

Bobby Hart is not the only Giants reject starting on the Bengals’ offensive line. John Jerry was not employed by an NFL team in 2018. The Giants cut ties with the lineman after a tumultuous 2017 season and Jerry was unable to find a home last season.

Jerry’s struggles, however, have not seemed to follow him to Cincinnati. In fact, in preseason week one, John Jerry was the highest-graded left guard in the NFL according to Pro Football Focus. Jerry didnâ€™t allow a sack, hit or hurry from 21 pass-blocking snaps in the Bengals preseason opener and posted a 77.4 overall grade.

This still does not give the Giants any regrets about their decision to move on from Jerry though. The Giants have Will Hernandez at left guard and he is one of the league’s best and most promising young offensive linemen.

Who To Watch On The Giantsâ€™ Defense

There are now a couple of matchups in the trenches for Giants fans to look out for. With Bobby Hart lining up at right tackle, it will be exciting to watch the Giants’ new blood get after the team’s scrapped parts. Edge rushers Lorenzo Carter, Markus Golden, and Kareem Martin will face favorable matchups against Bobby Hart.

When facing a weak opponent like Hart, it is important to see the defense’s starters dominate as they should. If the Giants’ edge defenders underperform, it will be very telling of how bad this defense might be in 2019. Carter, Golden, and Martin need to get after the quarterback and prove that they are worthy of leading the Giants’ pass rush this season.

On the interior, the Giants will be lining up Dexter Lawrence, B.J. Hill, and Dalvin Tomlinson. This will leave John Jerry with his hands full as this core creates one of the NFL’s best young defensive lines. Jerry has been a positive performer during preseason so far, but expect to see the Giants’ defensive line give him some trouble.