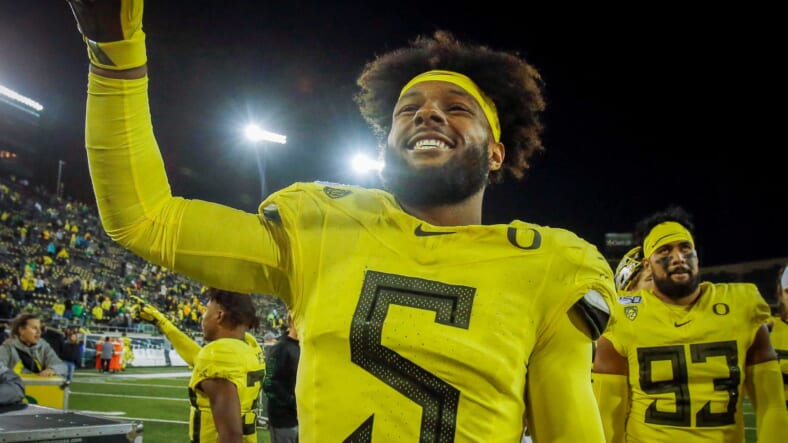 Barring a miraculous turnaround, this is another season where the New York Giants will have a high pick in the NFL Draft.

That pick, depending on how badly the rest of the season goes, could even be one of the very top ones. It seems like the front office has acknowledged that possibility, as the Giants were one of the teams to send a scout to check out potential number one pick Kayvon Thibodeaux.

Thibodeaux’s Oregon Ducks took on the UCLA Bruins earlier today, and the defensive end put on another dominating performance. 9 tackles, 3 sacks and a forced fumble proved again why Thibodeaux is one of the top prospects for the upcoming draft.

According to Oregon Live, a number of NFL teams had scouts in attendance. Some General Managers went as far as attending the game personally.

It’s possible not all of those scouts were there to see Kayvon Thibodeaux. Some of the teams listed, after all, are far from being in a position to take him. But the presence of scouts from some of the league’s bottom teams is far from a coincidence.

Thibodeaux would bring the kind of pass rush influence to the Giants that the franchise hasn’t truly regained since moving on from Jason Pierre-Paul.

On the other hand, the Giants acquiring a talent like this in the draft would be a bittersweet moment. If the Giants are selecting high enough to pick Thibodeaux in the first place, it means little has improved in their record from this point in the season.