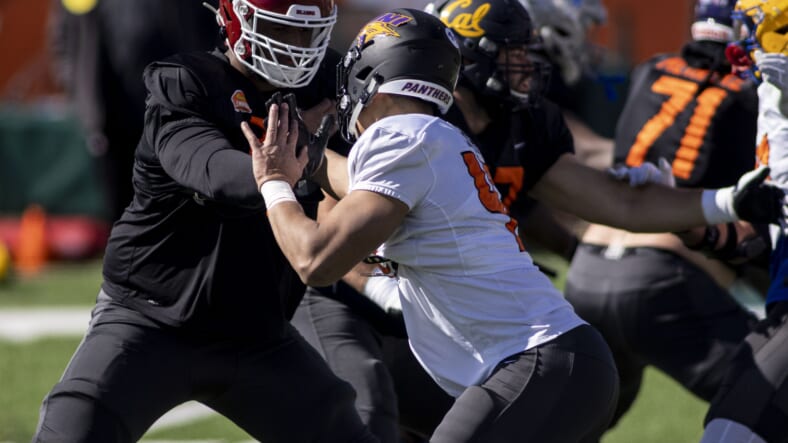 While everybody expected the New York Giants to draft an interior offensive lineman with 116th overall pick, they took an interesting approach, landing Northern Iowa pass rusher Elerson Smith. The 6’6″ and 252-pound defender is a bit skinny and could use some more weight in the trenches, but he has incredible athleticism and a tall, bendy frame.

While he continues to fill out his frame with muscle mass, Smith should see an increase in power. He already has quality speed, but transitioning speed to power will be the next step in his development.

I see Smith as a situational pass rusher who can offer value in sub-packages; he can contribute in similar situations, like when the Giants faced off against the Seattle Seahawks and utilized Carter Coughlin as a spy on the edge. While heâ€™s not refined in the running game, adding more size and strength will help him seal the edge more efficiently. However, his elongated span and long strides are an exciting aspect but paired with skinny legs and a weak lower body, thereâ€™s no question he needs to add a bit more muscle.

This mightâ€™ve been a reach for the Giants, who desperately need help in the interior of their offensive line, but Smith has some upside and is another Senior Bowl standout, an event that general manager Dave Gettleman seems to rely on. Theyâ€™ve taken a bit of an interesting approach this year, relying on their draft board and picking the best player available instead of allocating draft capital for needs.

The Giants have changed their philosophy when it comes to drafting, trading back twice this year, the first time Gettleman has ever done so in is eight years operating the draft as a GM. Theyâ€™ve walked away with some stellar assets for next off-season, but they still have a few weaknesses on the roster that need to be addressed.