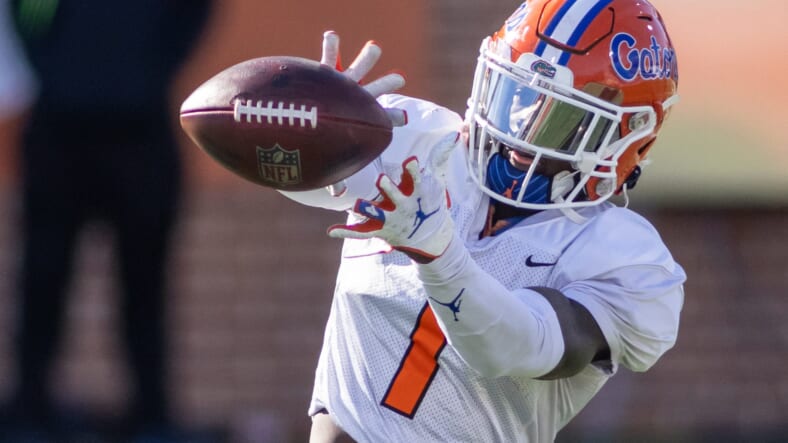 After months of speculation, the New York Giants have finally made a decision with the 20th overall pick, selection Kadarius Toney. Big Blue had an active free agency period, adding players like Kenny Golladay, Adoree Jackson, Kyle Rudolph, and more. They’re clearly keen on winning now with QB Daniel Jones under center, providing him with ample weapons to utilize.

However, more work is needed, as the Giants’ defense ranked top-10 in points allowed per game in 2020 but their offense ranked 31st on points scored on average. Clearly, a step in the right direction is needed, and it starts with the coaching staff.

Hopefully, Toney can contribute to production instantly and offer an immediate impact for a team that’s committed to winning now. With a 17-game season in 2021, they have more time and games to reach the postseason, and the rookie class this year must play a significant part in their quality moving forward.

What does Kadarius Toney bring to the Giants?

Toney had 1,145 yards and 10 touchdowns last year, representing a fantastic playmaker from the slot who can also thrive from the “Z” alignment. It’s clear the Giants are going all-in on Daniel Jones, as Toney can take a pass to the house at any given moment.

Per the Draft Network:

Toney is an electric slot receiver whoâ€™s continued to improve every season in Gainesville. He is much more satisfying than his size indicates because heâ€™s electric with or without the ball in his grasp. His ceiling as a route-runner is a bit limited, but he was highly effective with the package that he was asked to run. Toneyâ€™s presence is always felt whether or not he has the ball, as he makes defenses account for him even if heâ€™s strictly a motion player.