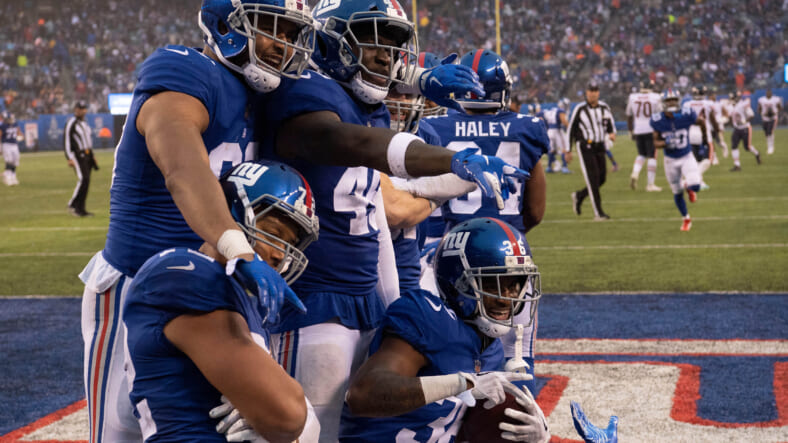 You can take a deep breath now, because the 2018 New York Giants’ season ends today. It wasn’t the season that anyone was hoping for following the draft, but it was perhaps inevitable as the Giants entered the season with a revised roster that was still in the process of being rebuilt.

Soon, the focus will turn to the offseason and how the team should best finish that rebuild, which started with both the head coach and general manager being fired. Before that happens, however, it’s worth taking a look back at some observations from this year. Each of the three things listed below are themes that defined the 2018 season, and could carry over into next year.

Gettleman could be the man, Shurmur might not be

The Giants hired Dave Gettleman and Pat Shurmur during the same offseason as their general manager and head coach respectively, but one of those two has done better than the other in terms of performance so far. Gettleman had a role in bringing Saquon Barkley to the Giants during the 2018 Draft, and has made other smart decisions so far like drafting Will Hernandez with the Giants’ second pick and signing Jamon Brown in the middle of the season.

Some of Gettleman’s less glamorous signings, such as B.W. Webb and Grant Haley, have also panned out and benefited the team. But just having a good roster isn’t enough to win in the NFL. You also need good coaching, and it’s safe to say that the Giants were not one of the better teams when it came to coaching this year.

It was a mediocre first year for Pat Shurmur, and that’s being a bit generous. Shurmur has been praised for coaching offenses, but hasn’t made the most of an offense that has Odell Beckham Jr., Saquon Barkley, and other weapons such as Sterling Shepard and Evan Engram.

It’s a bit early to advocate for firing a coach, but if next season continues down the path, it will be easy to start thinking that maybe Shurmur isn’t the right guy to coach the roster that Gettleman has assembled.

One of the running themes through the season was the quarterback position. Eli Manning took a fair share of the blame for the team’s 1-7 start, but the second half of the season saw an improvement in results and things calmed down a bit. There’s not as many people calling for Manning’s head at the moment, but there’s still uncertainty going into the offseason.

Manning is playing at an acceptable level right now but even optimistic fans have to admit that it doesn’t look like Manning has years left in his career. The Giants eventually will have to find a replacement quarterback, and this year’s free agency doesn’t have a lot of options. Nick Foles might have won a Super Bowl, but there’s few that would likely be happy with him as the Giants’ starting quarterback, after all.

If the Giants look to the draft, they have another problem. Getting hot in the later part of the season pushed the team down the draft order, and now, there’s a chance that the top quarterbacks will already be selected by the time the Giants make their pick. It wouldn’t be a good idea to take someone at the position just for the sake of drafting a quarterback, and Justin Herbert deciding to stay in school means that the quarterback needy teams in the top ten are competing for a smaller number of players.

This position was something that was talked about all season, and it will continue to be a point of discussion going into the offseason and the NFL Draft. It’s also the problem that can be resolved least easily.

One of the easiest things to notice about this season is that it hasn’t been easy on Giants fans. The team hasn’t been to the playoffs since 2016, and as a storied franchise located in a passionate sports city, fans expect better. They especially expect better than lackluster seasons where playoff hopes are a longshot by the time the season is halfway over. So you can’t really blame everyone for being frustrated.

Still, there were points during 2018 when it would have been nice for everyone to remember that we’re all on the same team. You aren’t a mindless hater for saying that the Giants should move on from Eli Manning, and you aren’t a fanboy for believing that he has another couple of years in him. You aren’t a fake fan if you ripped on the team for their early season performances, just like you aren’t a clueless optimist if you believed that they could turn their results around and get into the playoffs. Even if you might get that impression from interactions on social media.

It’s natural for a large fanbase to be divided, especially during a time like this, where the team is underperforming compared to the expectations set out at the beginning of the year. But as we leave 2018 and head into 2019, it will be much easier to get through the 2019 offseason without attacking each other over differences of opinion and remembering that, in the end, we all want the same thing for the team.