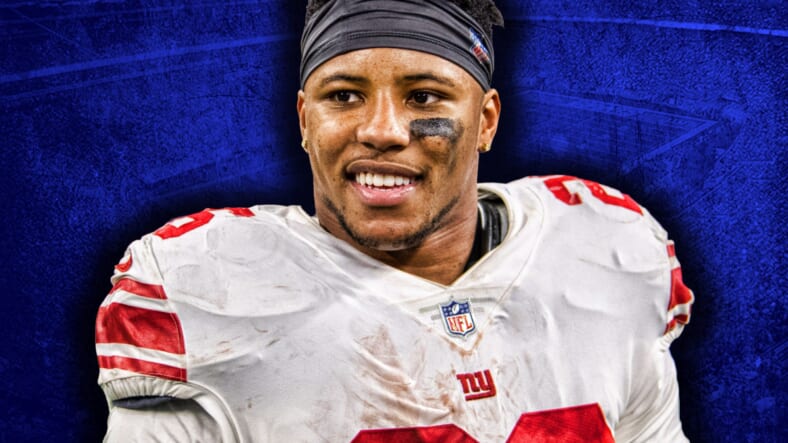 The New York Giants revamped their offense this offseason. The Giants spent big in free agency, signing alpha dog wide receiver Kenny Golladay to a humungous contract. Golladay is the big-body, contested catch, number one receiver that the Giants desperately needed. The Giants made another underrated signing on offense with the addition of tight end Kyle Rudolph. Rudolph brings consistency and dependability to the tight end position, two traits the Giants previously lacked at that spot.

The Giants then doubled down in the 2021 NFL Draft, selecting dynamic wide receiver Kadarius Toney in the first round. Toney gives the Giants a dangerous after-the-catch weapon that they lacked. And, of course, the Giants have some capable returning talent on the roster already. Sterling Shepard is still a dependable intermediate route-running receiver. Evan Engram is still a big-play threat at tight end. And Darius Slayton is a solid deep threat Z-receiver. The Giants also added receiving depth with John Ross III, Dante Pettis, and Devontae Booker.

All of these additions on offense are huge for Giants’ third-year quarterback Daniel Jones in his “prove-it” year. But another player who has not been discussed much this offseason will also benefit from this influx of offensive talent: Superstar running back Saquon Barkley.

The return of Saquon Barkley

Saquon Barkley entered the NFL as an instant star in his 2018 rookie campaign. Barkley won offensive rookie of the year that season as he led the league in total yards from scrimmage with 2,028. Saquon was explosive in 2018 and he followed it up with another impressive season in 2019.

Barkley missed five games with injuries in 2019, but when he was on the field, he was still the dominating presence out of the backfield that the Giants were accustomed to. He totaled 1,003 rushing yards in only 13 starts. Saquon was still special, however, it became evidently clear in 2019 (and even further in 2020) that Saquon Barkley was being held back.

Saquon was frustrating held back by injuries over the last two years. He missed five games in 2019, bounced back down the stretch, then tore his ACL during Week 2 of the 2020 season, missing fourteen games. But injuries were never the only thing holding Saquon Barkley back from reaching his potential. Barkley also struggled due to the lack of talent around him. The Giants simply asked Saquon to do too much in his first two seasons. But now, with a revamped offense, Saquon Barkley is primed for a huge 2021 comeback season.

How Saquon Barkley will benefit from the revamped offense

The last time Saquon Barkley hit the field, he was the only superstar that the Giants had on offense. The only player that defenses had to gameplan around was Saquon Barkley, and they did that in the first two weeks of the 2020 season. Barkley totaled just 34 yards on 19 rushing attempts last season. In Week 1 he was held to a putrid 6 yards on 15 attempts.

This was not the first time this has happened to Saquon. In Week 10 of the 2019 season, Barkley rushed for 1 yard on 13 attempts against the New York Jets. Saquon has struggled with injuries in his career but he has also been held back by a severe lack of talent around him.

In 2021, that will change. Defenses now have new names and talents to respect on the Giants’ offense. Defenses need to account for Kenny Golladay as a vertical threat. Defenses need to gameplan around Kadarius Toney’s ability to break a tackle and take the ball to the house from anywhere on the field. They do not just have to focus on Saquon Barkley and what he does out of the backfield.