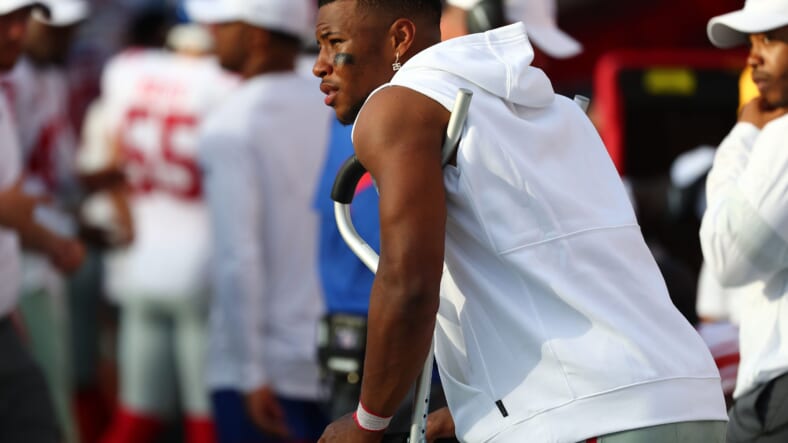 Saquon Barkley’s comeback is one of the top storylines of the season for the New York Giants, but as of now, no one knows exactly when that date is going to be. An ACL tear, after all, is a major injury to recover from. As a key piece in the franchise’s future, the Giants aren’t in any mood to rush Barkley back and risk another injury that would keep him out for a long period again.

Figures associated with the Giants have said multiple times this offseason that the decision on Barkley’s comeback date is being left in the hands of the team doctors rather than the coaches. Barkley himself has kept to that same tune. During an interview with the Rich Eisen Show, Barkley didn’t have much to say when it comes to whether or not he’ll be on the field for the season opener.

We've seen his workout videos on social media, so @richeisen flat-out asked @Giants RB @saquon Barkley if he'll be out there #NFL Week 1, the pressure on Daniel Jones and where he should go in #fantasyfootball drafts: pic.twitter.com/0JHyXunUm3

“Those are conversations I actually haven’t had yet, so far,” Barkley said when questioned directly about what his week one status would be. “The focus is, you know, take it one day at a time and kinda go with the flow and listen to your body… And listen to your trainers.”

“I think I know better than that,” he added, when asked to say something about the injury.

Much of the interview would go the same way, keeping the same tune that’s been maintained for most of the offseason. According to Barkley, his focus is on listening to his body – and his body is only speaking to him one day at a time.

Given that, we can expect the speculation to continue right up to the start of the season. Anyone hoping for a confirmation that Barkley will indeed be on the field from the start of the season will walk away disappointed, but at the very least, we know the Giants aren’t taking Barkley’s health lightly and risking another injury soon into the season.