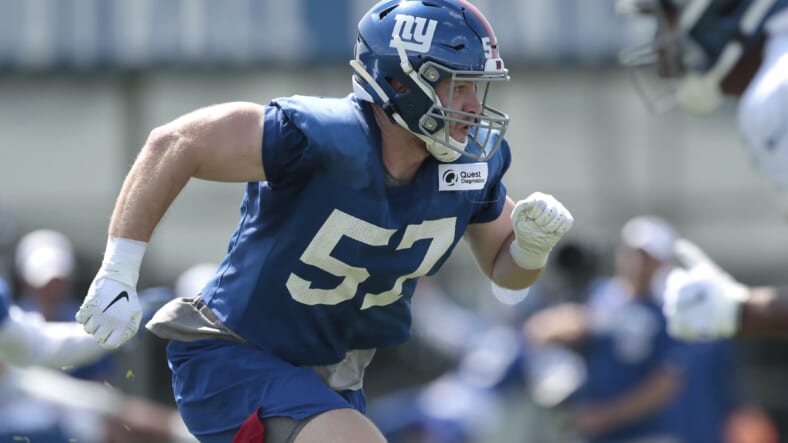 It’s been a complicated past year for New York Giants linebacker Ryan Connelly. More specifically, it’s been less than a year since Connelly came in as a fifth round draft pick, took the starting role at inside linebacker, and became one of the top young players on the Giants defense – before being sidelined by an ACL tear not long into the season.

And the league’s response to coronavirus hasn’t made it any easier for Connelly and others to recover from injury. The Giants facilities weren’t even open for most of the offseason. The team had a virtual program, but you can only gain so much without training face to face.

Now that Connelly is back on the field, there’s added competition. Blake Martinez was brought in to play the same position. The other spot on the inside will probably be held by David Mayo or Connelly. Either way, the competition is fiercer than last year. And Connelly isn’t the default starter he may have been before the Martinez deal.

Connelly speaks on his offseason

The offseason wasn’t that bad for Connelly based on what he told the New York Post. While it did make his recovery more difficult, it also meant a chance to connect with family again. In fact, Connelly went as far as calling it a blessing in disguise.

“It was a nice breath of fresh air to be back with family, especially during these tough times. I think it was definitely a blessing in disguise. I know my parents really enjoyed having us all back and one big family again,” he stated. He had to head back to Minnesota once most of the team’s offseason was cancelled, but said the Giants helped with that.

He’s not sweating getting back into action with the team. His focus has been on adjusting to the new staff and their system, mainly. Not so much on the competition for his previous starting spot.

“Everything has to be earned, and Iâ€™m just trying learn the scheme one day at a time and see how I fit with that and how I can play fast within it. Everything else will take care of itself.”

Connelly praised Martinez’s knowledge and said that all the linebackers are learning from each other.

The player that’s perhaps his primary competition, David Mayo, started 13 games last season and registered 82 total tackles as well as a pair of sacks. Connelly had 20 tackles last season – but he only played in four games before his injury, getting the start in three of them.

It still remains to be seen who will start at inside linebacker for the Giants. But a the least, it’s safe to say they have better options this year than they did before, at a very important position.