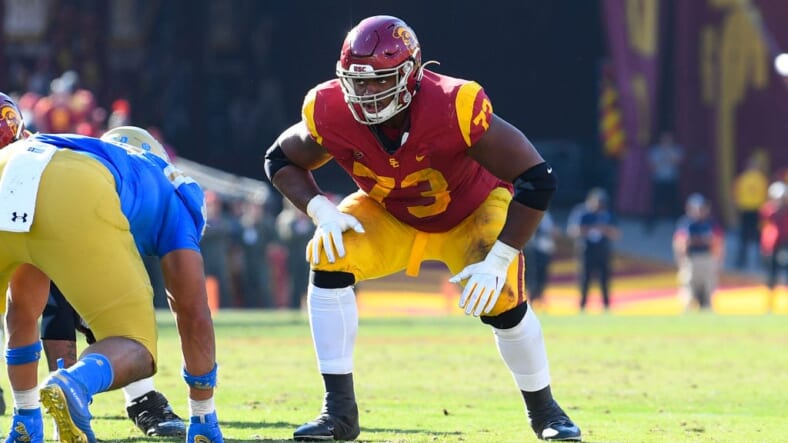 The New York Giants entered free agency with plenty of needs and will proceed toward the NFL Draft with more to fill. Having satisfied the No. 1 corner and linebacker position with free-agent talent, the Giants now have to allocate more resources to pricey positions.

The tackle position is weak, as Nate Solder remains a liability on the left side, conveniently Daniel Jones’s blind-side. General manager Dave Gettleman signed veteran swing-tackle Cam Fleming who has experience with the Patriots and Cowboys to compete for the right tackle spot, but nothing is solidified just yet.

One position of weakness is at center, and Matt Hennessy from Temple could be a quality option if he slides to the bottom of the third round. Formerly playing at Don Bosco, Hennessey would compete for the starting job. Filling this position is an absolute must and will likely be taken care of with a mid-round pick like the Temple standout.

The Giants need an offensive tackle to develop, and USC’s Austin Jackson fits the bill. With Nate Solder sitting pretty with two years remaining on his deal, Jackson has the advantage of time. He’s an extremely athletic player that has a ton of potential but requires time to develop and work out the kinks in his game.

Jackson’s most significant flaws lie in his balance and identification of stunts and blitzes. He has the speed and size to become a quality left tackle to protect Jones for the future, but he’s not ready to take over that role at the NFL level just yet. Gaining a future starting tackle in the second round is a steal at the end of the day.

Gettleman is a firm believer in taking the best player available, given Saquon Barkley’s selection in 2018. Daniel Jones is a different situation altogether since the team desperately needed a quarterback.

The selection this time around reflects Gettleman’s true beliefs, that Isaiah Simmons is the best option for Big Blue at 4th overall.

Simmons is an enticing athlete and overall defender, as he self-proclaims. The Clemson standout can play all over the defense, as a mid-high safety and off-ball cover linebacker. Tight ends have plagued the Giants in recent years, and they could fill that void with one swift move. Simmons is also a player of multiples, fitting the Joe Judge mold of playing a diverse array of positions. This selection is the easiest one of the Giants to make, considering his immense talent and youth.