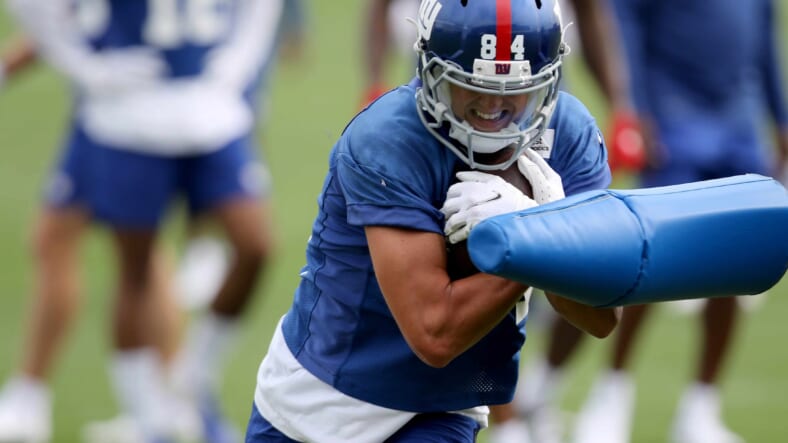 The New York Giants play their first preseason game of the season tonight at 7:30 pm against the New York Jets. Joe Judge and the Giants plan on treating this preseason game as a traditional fourth preseason game. This means that the starters will barely play (if they even play at all) and the backups will receive the majority share of snaps.

Third-year wide receiver David Sills V has turned heads this summer with numerous impressive practice performances. Sills was a tremendous wide receiver in college at WVU. He totaled 33 receiving touchdowns in his final two collegiate seasons before going undrafted in 2019. David Sills has been with the Giants since September of 2019 after he was waived by the Buffalo Bills that August.

In 2020, David Sills was having an impressive summer practicing with the Giants. Unfortunately, he was not able to play in the regular season, as he suffered a foot fracture that landed him on IR and out for the year. One year later, David is once again having a phenomenal training camp.

David Sills spent the entire 2021 offseason following quarterback Daniel Jones across the country to train for this season. His hard work seems to have paid off as David has looked like a true receiving threat, making plays against the first-team in practice with the Giants. Still, there are a lot of talented wide receivers on the Giants’ roster, some that can contribute on special teams. If David Sills V wants to win a spot on the roster, he is going to have to put together some strong performances in the preseason.

Like David Sills, Rodarius Williams has been popping off at training camp practices. The Giants drafted Rodarius Williams in the sixth round of the 2021 NFL Draft. Rodarius is the older brother of Cleveland Browns’ cornerback, Greedy Williams. Williams is a press-man corner who exudes confidence. He has the physicality to counteract big-body pass-catchers outside the numbers. He also finished his college career with 150 tackles (35 stops) and allowed just 54.2% of the pass targets against him to be completed for 1,636 yards and 11 touchdowns.

The Giants have plenty of talented defensive backs on their roster. But Rodarius Williams has been a pleasant surprise through camp and looks like he could sneak his way onto the back-end of the roster. With a couple of solid performances in the preseason, Rodarius Williams could secure a spot on the final roster.

Running back Gary Brightwell is another player that the Giants drafted in the sixth round of this year’s NFL Draft. The Giants added a lot of depth at running back this offseason as Saquon Barkley prepares to return from his knee injury. Gary Brightwell, however, now seems to be buried pretty deep on the team’s depth chart.

The former Arizona Wildcat has an uphill battle to make the final roster. He has not played much in practice due to some nagging injury problems. But with an impressive string of preseason performances, Gary Brightwell could make his presence felt and give himself a chance at the fifty-three-man roster. The backups are expected to see plenty of playing time on Saturday against the Jets. This is the game for Gary Brightwell to show out and put his name back in the running.