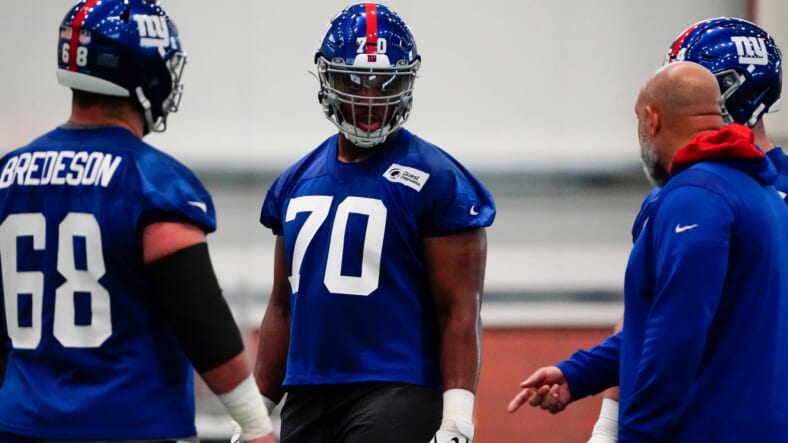 The New York Giants made massive improvements on their offensive line this offseason. The Giants’ offensive line has been one of the worst in the NFL over the course of the last several seasons. However, things appear to be on the up and up now with new general manager Joe Schoen bringing in a slew of reinforcements. The marquee acquisition for the Giants’ line this offseason was seventh overall draft pick, Evan Neal. With the seventh pick in the 2022 NFL Draft, the Giants landed a pure physical talent in Evan Neal.

Evan Neal is a physical freak of nature. The Alabama product measures in at 6-foot-7, 337 pounds, plays with power but moves with finesse. However, physical attributes will only get you so far at the next level. As Evan Neal prepares for the start of his first NFL season, the focus is on improving his technique:

“I had to become more of a technician, couldn’t just rely on my raw athleticism… I feel like I’m more comfortable in my sets, I’m using my hands more… I feel like my game is trending in the right direction”

Evan Neal is already a stud of a football player. Yet, he has barely learned how to play the game of football from a technical standpoint. Neal’s potential is limitless and the surface has barely even been scratched. Once Neal begins to develop his technique, there is no telling how great his talents could become.

On the flip side, there is still a lot of room for Evan Neal to improve, and his lack of technical refinement will cause growing pains in his rookie season. Most rookie offensive tackles experience growing pains. The Giants are familiar with this concept as left tackle Andrew Thomas struggled in his rookie season, but experienced a breakout in his 2021 sophomore season. Technical refinement is exactly what Thomas needed. Once Evan Neal masters his technique, the Giants are going to enjoy dominant play out of their young right tackle.