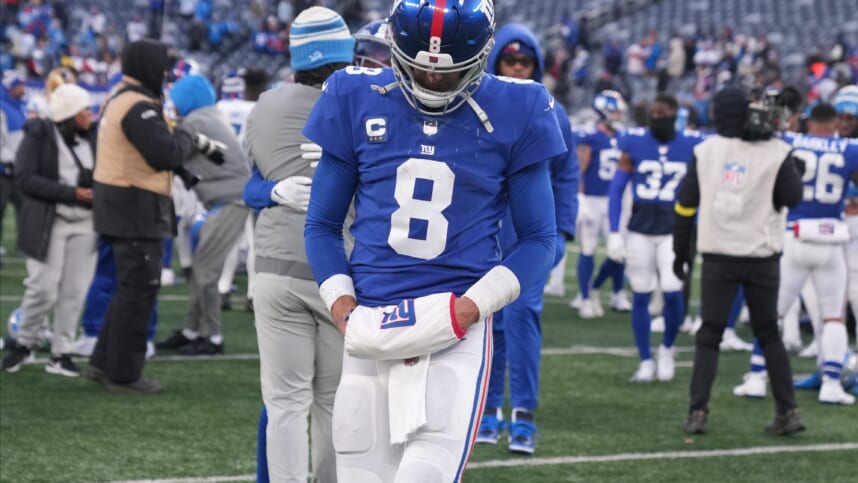 The New York Giants lost 31-18 against the Detroit Lions today after a slew of injuries sunk Big Blue. Numerous key members of the Giants’ starting lineup left the game prematurely due to injuries. The Giants’ offense struggled to gain traction as the Lions’ defense led the team to its third win in a row. After an impressive win over the Texans in Week 10, the Giants’ record has fallen to 7-3 with the loss against the Lions in Week 11. Big Blue plays again this Thursday as they travel to Dallas to face the Cowboys on Thanksgiving, attempting to get things back on track.

Takeaways from the New York Giants’ loss to the Detroit Lions

Daniel Jones was just about the only bright spot for the New York Giants offense in today’s loss against Detroit, leading the team in both passing and rushing. Despite having the 31st-ranked run defense entering the matchup, the Lions managed to bottle up Giants running back Saquon Barkley. Saquon was held to only 22 rushing yards on 15 carries, his lowest total of the season thus far. Daniel Jones was the team’s leading rusher as he gained 55 yards on the ground with 1 touchdown on 7 carries. Backup running back Matt Breida scored the game’s second rushing touchdown as he took 3 handoffs for 13 yards and the score.

Daniel Jones threw for a season-high 341 passing yards today. It was an inconsistent performance from Jones, though, as he threw 2 interceptions and only 1 touchdown. Daniel’s streak of not throwing an interception in six weeks came to an end today. The Giants lost the turnover battle 0-3 as Jones threw two picks and Isaiah Hodgins fumbled the football.

The Giants outgained the Lions with 413 total yards of offense compared to 325 yards from Detroit. Despite this, Big Blue was unable to reach the end zone consistently and found themselves losing the matchup 31-18. Graham Gano struggled to find his footing in the windy MetLife Stadium, missing two extra points.

The biggest storyline for the Giants coming out of this game will be the slew of injuries they endured. New York’s leading receiver in the game, Wan’Dale Robinson, put up 9 receptions for 100 yards before going down with a non-contact knee injury. Robinson was ruled out immediately and the belief is that the injury will keep him sidelined for an extended period of time.

Adoree’ Jackson was also knocked out of the game with a knee injury after fielding a punt. The Giants were already shorthanded in the secondary with Xavier McKinney out of the lineup. But now that Jackson has suffered an MCL sprain, he will also miss 3-5 weeks, leaving Big Blue paper thin on the back end of the defense.

The Giants play their next game later this week with a Thanksgiving matchup against the Dallas Cowboys. Big Blue does not have much time to get healthy, but they will need to try their best as this upcoming divisional matchup is incredibly important. The Giants could find themselves in third place in the NFC East with a loss against Dallas. Gaining that road win will go a long way toward the Giants’ efforts to make it into the postseason.