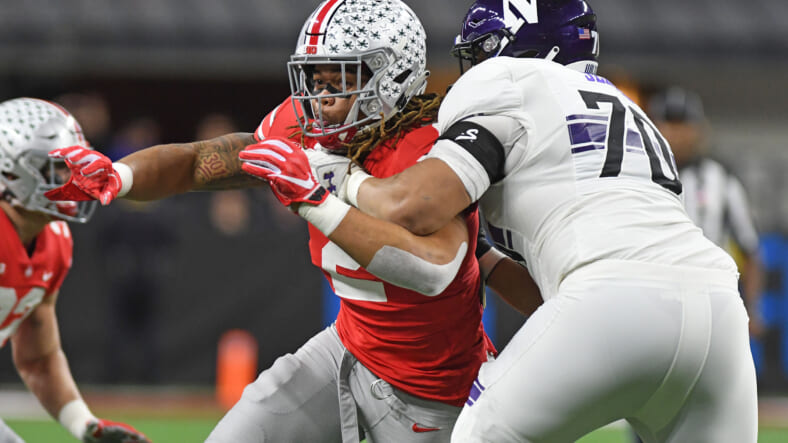 With teams maneuvering around the New York Giants in the 2021 NFL draft, they have a fantastic opportunity to sit pretty at 11 and pick the best player available. Co-owner John Mara recently stated that the Giants donâ€™t necessarily have to take a receiver or a cornerback after signing Kenny Golladay and Adoree Jackson, which opens the door for many different prospects to be considered.

The Giants could look to a player like Rashawn Slater out of Northwestern to bolster their offensive line, or they could provide Daniel Jones with another elite weapon like Jaylen Waddle or Kyle Pitts, given theyâ€™re on the board. Even the defense could be a focal point, with players like Micah Parsons or even a pass rusher.

At the end of the day, the Giants have an opportunity to secure a premium prospect that will make an impact on day one, and with the expectation that four quarterbacks will be off the board in the top 10 picks, there will be a stud available at 11. Letâ€™s take a look at two players the Giants could consider, upgrading either side of the ball significantly.

During Parsonsâ€™ Pro Day at Penn State, he answered a lot of questions about his athleticism. Running a 4.39-second 40-yard dash, Parsons proved he has elite straight away speed, with the ability to play as a sideline to sideline linebacker.

His comments after his work out really stood out, indicating extreme versatility, with confidence to play running back, receiver, and even comparing himself to Cam Newton when asked if he could play quarterback. However, Parsons understands he will be a linebacker at the NFL level, but not just an ordinary one.

While Micah opted out of the 2020 season, his 2019 tape tells the entire story. Securing 5.0 sacks, 14 tackles for loss, and four forced fumbles, Parsons is capable of stopping the run at an elite level but also rushing the passer with above-average moves for an MLB. Pairing him with Blake Martinez, the Giantsâ€™ current starting MLB, would be devastating for opposing offenses.

Parsons is ultimately a player you build around, a foundational piece that lays the groundwork for the future. Adding him to a defense that recently acquired Adoree Jackson and is already considered a top 10 unit would be incredible. If the Giants really believe that defense wins championships, this should be an easy decision for them, as they can always find an offensive guard in the second round and a receiver in the third, given how deep this current draft class is.

Alternatively, Rashawn Slater out of Northwestern could be an efficient move, considering the Giants cut starting RG Kevin Zeitler, saving $12 million in cap space. This move left a gaping hole in the OL, and Slater is capable of playing on the interior and also kicked outside at tackle.

His versatility makes him an elite prospect and one that has been shooting up the draft boards as of late. Premium offensive linemen are often selected in the top 15, but with so many talented players in this draft and the lack of information, Slater could fall to the Giants at 11, giving them an opportunity to secure a position of need but also add a player with All-Pro potential.

Slater does have smaller arms, indicating he could be a better fit at guard, but the Giants can do what they please with him. This brings up the best player available complex, as the Giants could argue that Slater would fill a big need, and Parsons is much more of a luxury pick.

Personally, I believe Parsons has generational upside and the potential to make the Giantsâ€™ defense one of the best in the NFL, if not THE best. Slater hasnâ€™t played in over a year, and most of his hype is based around his tangible traits and some solid film. He might take a bit of time to refine, and with the lack of information out there, the connection the Giants have with Parsons, and their own coaching staff with Spence Chaos makes more sense in my eyes. Of course, Micahâ€™s off-the-field issues are something to consider, and I would rely on the Giantsâ€™ coaches to determine the severity and implications of those actions.