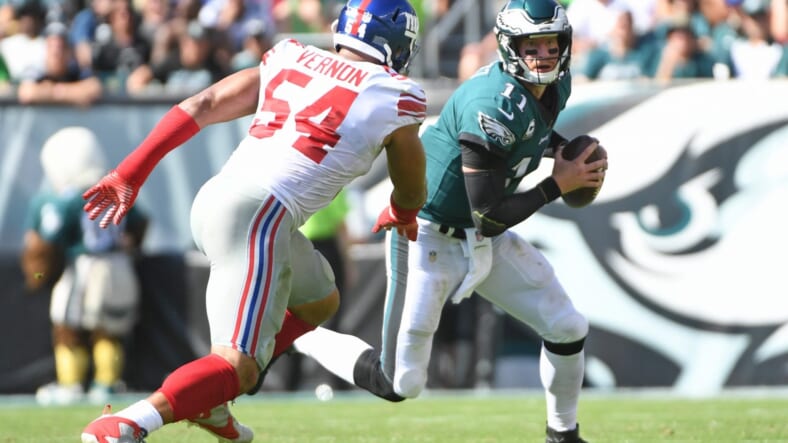 There’s some bad news for fans that were hoping the New York Giants would move on from edge rusher Olivier Vernon, who has one of the largest cap hits on the team despite performing poorly compared to other players making the same thing at similar positions. According to NFL Network’s Ian Rapoport, the team is leaning towards bringing Vernon back for another year and not making a move to offload him.

It does sound like the #Giants are leaning toward keeping Olivier Vernon… https://t.co/uiAD1o6kku

That will, of course, not be the most popular move because of the way the Giants cap situation looks right now. Vernon is the third highest paid player on the team and has a larger cap hit than last season’s big name acquisition, Nate Solder, or more productive players such as Alec Ogletree and Janoris Jenkins.

However, the Giants may be keeping Vernon despite the high cost because even if Vernon were traded or released, the Giants would be left with $8M in dead money from his contract. That is, the Giants would still take the $8M cap hit even if Vernon isn’t on the team. Another factor might be that other teams are likely wary of Vernon following a lackluster last season, making it harder to find a potential trade partner.

Vernon’s 30 tackles last season is down from 37 the year before, which in itself is a downgrade from 64 in 2016, which was Vernon’s debut season in New York and also the best of his three seasons as a Giant. 2016 was also the best year of Vernon’s overall career in terms of tackles, but that production hasn’t been matched since.

Another factor is that it looks unlikely that the team will take a pass rusher with their first draft pick instead of a quarterback. That makes replacing Vernon through the draft harder, although that fact doesn’t make a potential move to keep Vernon any more popular.

There’s plenty of fans who would rather look for a cheaper replacement in free agency, but if the Giants don’t go that route, we’ll all just have to hope that Dave Gettleman is able to see something in Vernon that everyone else is missing.