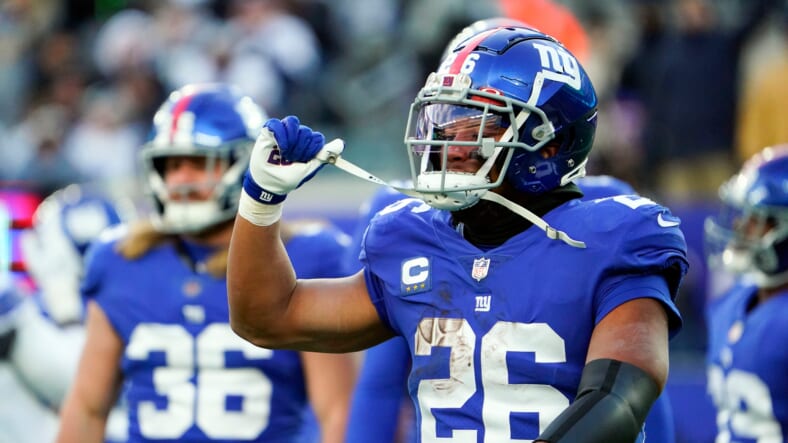 New York Giants running back Saquon Barkley (26) reacts as the offense leaves the field in the second half at MetLife Stadium. The Giants fall to the Cowboys, 21-6, on Sunday, Dec. 19, 2021, in East Rutherford. Nyg Vs Dal

The New York Giants haven’t seen the best version of Saquon Barkley since his rookie season back in 2018. Barkley tallied over 2000 all-purpose yards with 15 total touchdowns, winning Offensive Rookie of the Year and a Pro-Bowl nod.

After three consecutive seasons of injury-riddled play, Barkley is preparing to steal the show in 2022, hoping to earn a long-term contract from the Giants or another club after the season concludes.

One year removed from an ACL tear, Barkley is feeling like his old self again, showcasing confidence in his style and physicality on contact.

The New York Giants have the old version of Saquon Barkley back:

However, the 25-year-old running back continues to bleed confidence despite all the adversity he’s faced over the past three years. Simply playing football, the game he loves, was his goal at the end of the day. Whether it be Week 1 or training camp, he’s just happy to be back in the groove of things.

“I wouldn’t really say that Week 1 is the one I circled. It was kind of just camp. Just football in general. I was so excited to get back. Fresh start. New faces. Familiar faces,” Barkley told reporters on Friday. “Even though it was long, and it was tiring, in a weird way you kind of love the grind of camp. And that’s where you kind of build your team together and find out where you need to work on. Find out what things we’re capitalizing on in camp and take that onto the season.

Barkley has stated several times this off-season he feels 100%, far better than the 2021 season that was interrupted by an ankle injury against the Dallas Cowboys. He managed 593 rushing yards and 263 receiving yards, well below his standards.

However, the new offense led by Brian Daboll and Mike Kafka will extrapolate on his skill set, activating him as a receiver more frequently. Barkley tallied 721 receiving yards during his rookie season but just 761 over the past three seasons combined.

“I’m really ready. If I have to compare it to last year, way beyond what I was before,” Barkley said. “It’s not even close.”

Barring injury, Barkley is in line for a bounce-back campaign that will set him up nicely for a big contract following this upcoming season. However, actions speak louder than words, but a rebuilt offensive line and better execution should help him achieve this goal moving forward.