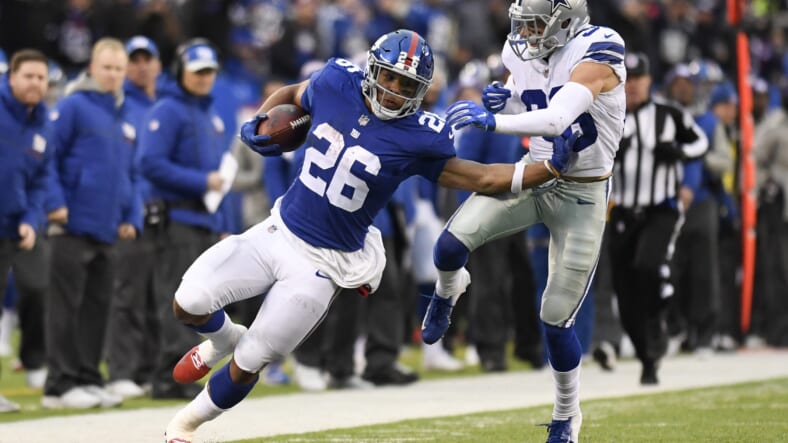 There’s not a ton of areas the New York Giants have excelled in the past years, but ever since drafting Saquon Barkley, the team has had an edge at running back – at least when Barkley is healthy, which wasn’t for the majority of last season. And it looks like this year, the Giants could be set for another strong season at the position if the addition of Dion Lewis as the number two works out and Barkley remains healthy throughout the year.

Their talent at the position this year has drawn some attention from the wider media, with Bleacher Report’s Matt Miller placing the Giants within the top ten backfields in the league.

This is largely thanks to Saquon Barkley, who should only be better in 2020 if the Giants can stay healthy up front and if second-year quarterback Daniel Jones becomes enough of a threat to keep defenses from loading the box. On pure talent, there is no better back than Barkley in the NFL, but he has to put it together in terms of production. A 2,000-total-yard season should be the expectation for him.

Barkley had 1003 yards last year, a drop of 300 or so from his production in his rookie season, and his touchdowns also fell from double digits down to six – but the problem had less to do with a legitimate slump and more to do with injury. The Giants brought Barkley back relatively quickly, and it showed in his play as in some games, he still appeared to be playing before he was ready.

The player that the Giants have brought in to back up Barkley, Dion Lewis, has had declining production. However, that may have more to do with playing behind Derrick Henry rather than skill. Lewis had 896 yards in his last season with the Patriots and depending on how the Giants use him could perform better than he did with the Titans.

The Giants have also, of course, made some changes to their offensive line which may help the running game. After taking a tackle in the top five, returning Saquon Barkley for another year, and signing Dion Lewis, the Giants may just be able to say that the running game is one area where the teamÂ is competent.