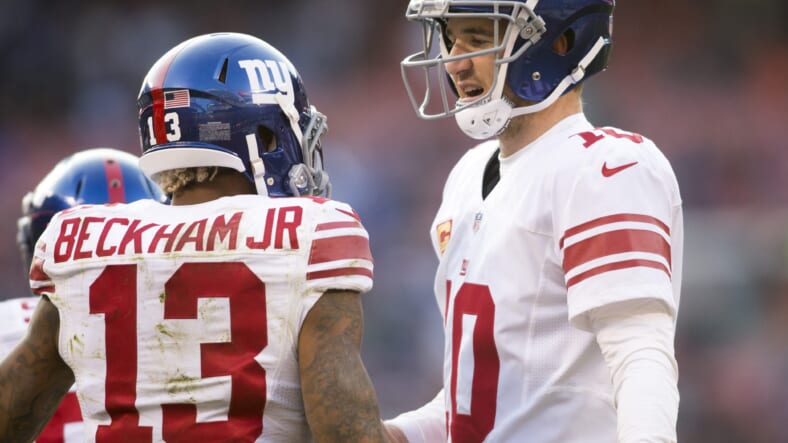 There’s not nearly as many controversies between the New York Giants and former wide receiver Odell Beckham Jr. in 2020 as there were last offseason, but sometimes something still comes along and stirs up the pot. In this case, the drama is a more minor one but has gotten attention anyway due to the fact that it’s the offseason and there’s not a ton going on until the NFL Draft comes up later this month.

The source of the drama is Twitter, where the Giants put out a seemingly innocent Tweet. They mentioned a number of Giants players past and present, but there was one omission that raised some eyebrows due to it seeming like an intentional slight.

You can only pick 3. One from each category. GO! pic.twitter.com/FhI5kMCEW1

That’s the omission of Odell Beckham Jr. despite the fact that other receivers that aren’t currently with the team such as Hakeem Nicks and Victor Cruz are mentioned. While Beckham’s career for the Giants wasn’t as notable as the other players listed, some believed it was a slight due to Beckham’s large role in the Giants offense in the more recent years when heÂ was a part of the team.

What Odell hater put this together . Lol let’s not be salty guys, this is comical https://t.co/gkfyEv5wHv

Of course, for every person who believes that Odell Beckham was slighted by the Tweet, there’s another person that simply doesn’t want to hear any further about the former Giants receiver and the way the team moved on from him.

Others have said that the reason Beckham isn’t represented is simple – he’s an active player on another team, unlike the others on the list. One of the people to point that out is another notable former Giants player, Justin Tuck.

No hate RG. Odell is a current player for another team. All the players on this list is either retired or still a Giant https://t.co/dS5q20vhEB

Intentional slight or not, the Giants will likely continue to have Odell Beckham Jr. controversies pop up until the team can truly say they’ve replaced him. Will that be soon? That might depend on just how much other players like Sterling Shepard and Darius Slayton step up.