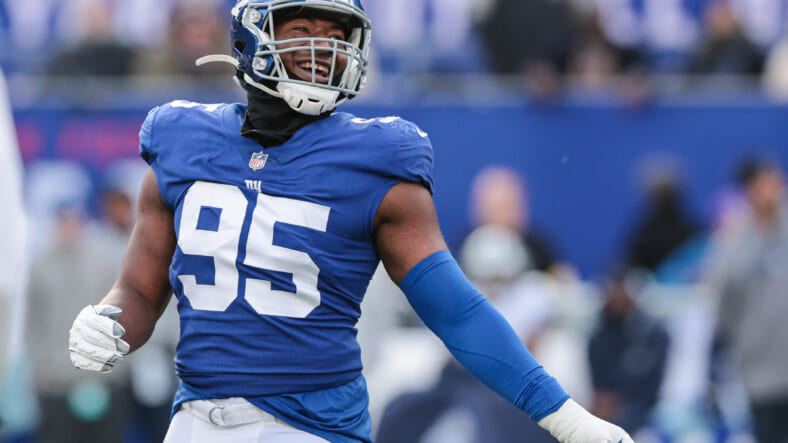 The New York Giants are in the midst of their preseason after a long and productive 2022 offseason. They kicked their preseason off with a 23-21 victory over the New England Patriots on Thursday. The preseason is an excellent time for teams to evaluate and adjust their roster accordingly, and New York was given an opportunity to evaluate its pass-rushing depth this past weekend. Quincy Roche played well in the first preseason game and has stood out during training camp this summer as he fights to prove he is deserving of a roster spot.

Why Quincy Roche should earn a roster spot with the Giants

The New York Giants landed Quincy Roche on the waiver wire last year when he was cut by the Pittsburgh Steelers after the preseason. As a sixth-round draft choice by Pittsburgh in last year’s draft, his presence on the waiver wire was a surprise. The Giants jumped at that surprise and put in a claim for Roche, landing him with waiver priorities.

Upon his arrival in East Rutherford, Quincy Roche made a quick impression as a rotational pass-rusher for the Giants. He wound up playing in 14 games for the New York Giants in 2021. In those games, Roche found his way to be productive, earning 2.5 sacks, 38 combined tackles, five tackles for loss, and one forced fumble. The Giants called upon Roche to start three games last season as their starters were sidelined with injuries.

In the Giants’ first preseason game of the 2022 season, Roche saw decent playing time and had some impressive snaps. Check out this nice tackle for loss by the second-year Miami product:

Quincy Roche also made a third-down run-stop later in the game. Roche was looked at as more of a designated pass-rusher last season, but it is good to see him improving as a run-defender. The New York Giants would be wise to give Quincy Roche a roster spot as he has proven to be a serviceable backup across last season and this summer.