New York Giants: Quincy Roche needs to step up with other pass-rushers hobbled 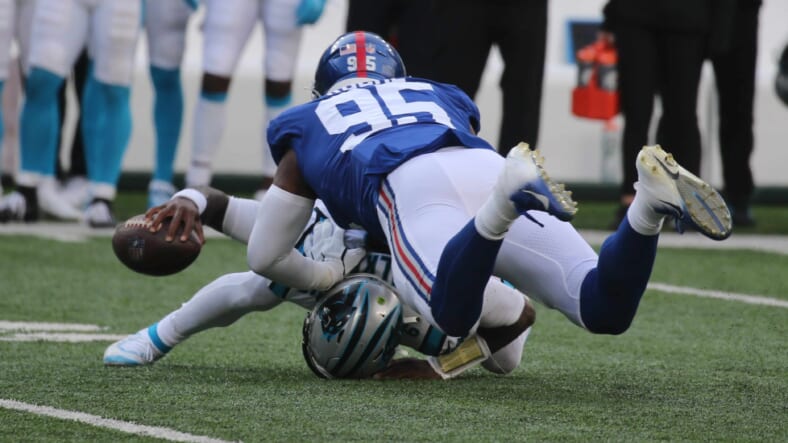 The New York Giants are getting hit with a wave of late-summer injuries. Kayvon Thibodeaux is missing time with a knee sprain and today, Azeez Ojulari went down with a lower-body injury. Ojulari worked hard to get back on the practice field after missing time with an injured hamstring. With the Giants’ top two pass-rushers hobbled, they are going to need rotational rusher Quincy Roche to step up ahead of the regular season.

Defensive coordinator Wink Martindale plans to implement a blitz-heavy defense that relies on pressuring the quarterback to find success. Having depth at the edge rusher position is of the utmost importance. New York needs solid rotational rushers in the fold to accommodate Martindale’s various blitz packages. But with both of the Giants’ starting edge rushers dealing with injuries, the depth players will need to play expanded roles. Quincy Roche seems to be ready for such a role.

The New York Giants claimed Quincy Roche off the waiver wire at the end of the 2021 preseason. Considering the need to acquire more pass-rushing depth this year, the Giants could make a similar move ahead of the regular season. However, Roche is capable of providing the Giants with the boost they need in his second season with the team.

Quincy Roche has been steadily making a name for himself during his time with Big Blue. Most recently, Roche played 46 snaps in the Giants’ Preseason Week 2 matchup with the Cincinnati Bengals. Quincy made a few noteworthy plays during this game that should help him as he fights for a role within the Giants’ defense.

Quincy Roche was a nice addition to the Giants’ defense last season. As a sixth-round draft pick in the 2021 NFL Draft, Roche was waived by the Steelers just before the start of the regular season. The Giants landed Quincy with a waiver claim and it did not take long for him to find himself on the field. Starting edge rushers Lorenzo Carter and Oshane Ximines suffered injuries that thrust rookie Quincy Roche onto the field. As a rookie, Roche impressed, totaling a respectable 28 combined tackles and 2.5 sacks in 14 games with three starts.

The Giants enjoyed quality rotational pass-rushing out of Quincy Roche in his rookie season. But in year two, Roche might have even more in store. Once again, injuries to the Giants’ starting edge rushers create an opportunity for Quincy Roche to earn playing time. The second-year Miami product can capitalize on this opportunity with a solid performance in the Giants’ final preseason game this Sunday. Quincy Roche could not only earn himself a roster spot, but he could also potentially earn playing time in the regular season while the New York Giants’ starting edge rushers recover from injuries.