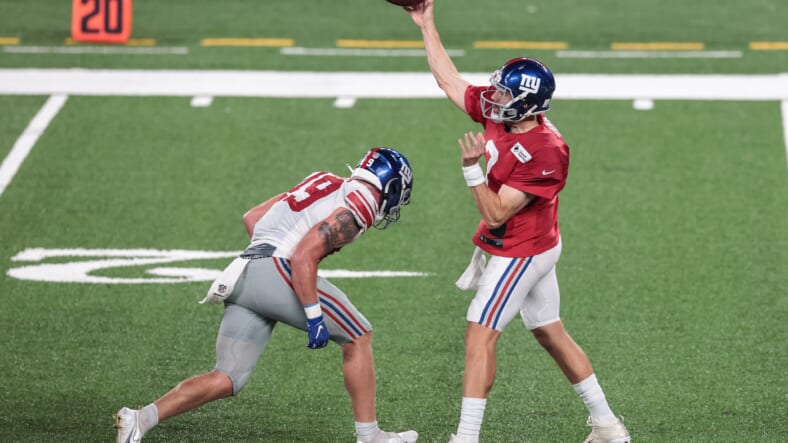 The New York Giants have sustained multiple injuries at outside linebacker, leaving Kyler Fackrell and Markus Golden as their primary pass rushers.

When the season began, they had Lorenzo Carter and Oshane Ximines both featuring at the position, but Carter tore his Achilles against Dallas in week five, and Ximines was placed on injured reserve with a shoulder issue.

Losing Carter was a massive blow to the defense, as Dallas immediately marched downfield and used a power running scheme to overwhelm the Giantsâ€™ defense immediately after he was carted off. While Carter isnâ€™t the type of linebacker to rack up sacks, he did a fantastic job securing the edge with his length and athleticism. The moment Golden replaced him, deficiencies became obvious.

How the New York Giants will operate at OLB moving forward:

The Giants are being forced to roll with Golden and Fackrell, which isnâ€™t necessarily a bad thing. Fackrell has been fantastic this season, on a one-year, $4.6 million deal. He has racked up 17 combined tackles, six tackles for loss, two quarterback hits, 2.0 sacks, and one interception in which he took for a touchdown.

Nonetheless, defensive coordinator Patrick Graham will have to add more talent to the position, providing some sort of rotation with their two young guns out. That brings me to rookies Cam Brown and Carter Coughlin, who have made solid progress this season.

Kyler Fackrell said rookies Cam Brown and Carter Coughlin have just started to blossom. He thinks the team can "definitely" rely on them to step in.

Fackrell stated that both Brown and Coughlin are starting to blossom and believe they can contribute toward the defense. So far, Cam has been fantastic on special teams. The former sixth-round pick has logged two assisted tackles for the unit and has been a primary strong side gunner. His contributions there have made head coach Joe Judge happy and could lead to an extended opportunity on the defense.

â€œI think the one thing about special teams for young players is that it allows them to learn and adjust to the speed of the game and the physicality. And just the reactionary instincts they have to develop within the game that transfers to offense and defense as well.â€

For Penn State, Brown played and 51 total games with 26 starts. He recorded 198 total tackles, including 14.5 for a loss and four forced fumbles. He has the frame to be an athletic coverage linebacker, but adding a bit more muscle mass and starting at OLB could be the Giantsâ€™ priority.

As for Carter Coughlin, who dominated at the University of Minnesota, he is more of a situational pass rusher. I donâ€™t think he has the frame and strength to seal the edge in the running game, making him a decent option on third downs in pass-heavy sets. His thin frame and speed makes him an attractive player on creative blitzes.

I could see how Patrick Graham good find imaginative ways to activate Coughlin in his scheme. However, he lacks the experience and technicalities to produce at the NFL level. I believe Brown will receive the first shot behind Fackrell and Golden, but Coughlin could be sprinkled in situationally.