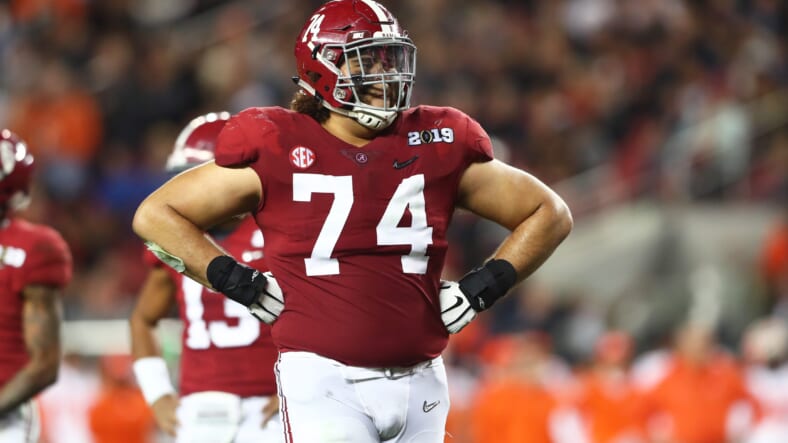 With the NFL Draft impending very soon, many voices have weighed in on which player the New York Giants will take at number four. Assuming they don’t trade the pick to a team looking for a quarterback, at least. Mekhi Becton, Tristan Wirfs, Andrew Thomas, and Jedrick Wills have all been popular names to throw into the mix. That doesn’t mean that there haven’t been dark horse prospects linked to the Giants, however, such as Derrick Brown of Auburn.

One prospect, though, has been placed ahead of the others by one of the parties with the greatest interest in getting the answer right – Las Vegas, and the gambling industry. According to Sports Betting Dime, it’s Jedrick Wills from Alabama that’s the favorite to be selected by the Giants, coming in at -167 odds. The prospect with the next highest odds? Tristan Wirfs, at +300.

Wirfs is the player that Peter King has mocked to the Giants but the betting odds give Wills a fair edge over the Iowa tackle. If there’s one thing that both players have in common, though, it’s that they’re safe picks. Both players are from major college programs and therefore have experience against the best – both players are also known for their athleticism, a trait that the Giants are looking for.

But Wills is from an Alabama program that the Giants already have connections to. Head coach Joe Judge, after all, is from the coaching tree of Nick Saban. The Giants are likely to try to take advantage of some of the lessons learned in Judge’s time there, and it helps to bring in players who can thrive under such a system.

Of course, it’s also to Wills’ advantage that his stats are some of the best in the country. With one sack allowed through his entire college career, Wills looks like a player that can immediately supplant Nate Solder at tackle and pass protect for Daniel Jones, filling a crucial need.

However, one must remember that Dave Gettleman is at the helm of the Giants and their draft strategy. While taking Wills seems like the orthodox choice, Gettleman doesn’t often take the expected route, leaving most fans wondering what he will decide right down until the decision is made.